Most people are aware of at least one aspect of Relativity: the famous mass/energy equivalence relationship.  This HTML format blog editor won't let me do superscripts or real math notation, so I'll write it as "E = m*c*c"; the energy obtained from completely converting matter to energy is the mass converted times the speed of light squared.  This is the energy that results from fission ("atomic") or thermonuclear fusion ("hydrogen") bombs.  A tiny bit of mass converts to enormous amounts of energy because the speed of light is an enormous speed.

There's much more to Relativity theory, including effects on the passage of time.  You've probably heard of the "twin paradox" an example of the effect of "time dilation", that time passes slower for moving clocks than stationary ones.  This effect is tiny until the speed of the clock approachs the speed of light, and wasn't really experimentally confirmed until practical atomic clocks could be constructed in the late 1950s.  Two clocks were synchronized to each other in a lab and then separated.  One stayed in the lab, the other flown around the world at the highest speeds available.  When the clocks were brought back to each other, their times were different; the one that flew was slower by the predicted amount.  This isn't a property of the clocks, it's a property of space time that Einstein deduced.

Time can be measured very, very precisely and as the physicists have thought of better ways of making atomic clocks, relativistic effects have been verified in other ways.  The latest atomic clock at the National Institutes of Standards and Technology, F2, should neither gain nor lose one second in about 300 million years, or 1 part in almost 10 quadrillion. The clock is based on a "fountain" of cesium atoms to determine the exact length of a second.  One of the seemingly bizarre conclusions of special relativity is that clocks change the rate they run as the distance from the center of a gravitational field changes.  Clocks on mountaintops run faster than clocks in valleys.  These are very tiny effects, but NIST atomic clocks measured the difference between two clocks when one clock was raised one foot!

This sort of stuff is interesting to most people, but they never dream that relativity will ever have any effect on their lives.  The speeds for time dilation to be visible are absurdly high, and the differences in time from climbing even to the top of Mt. Everest are just too small to ever see (not counting the movie "Interstellar", which showed them quite well). And the vast, vast majority of us will never work on nuclear weapons and turn matter into energy.  (Side note: in the Star Trek universe, they routinely "freeze out" energy into matter in their replicators, creating tools, food, whatever.  Energy has to be essentially limitless for that to be remotely possible.)

It turns out that if you're like most people, you're using relativity pretty regularly.  The GPS systems, now built in to our cars, our phones, and so many other things, would not work if relativity wasn't incorporated into their design.


The GPS system consists of 24 satellites in high orbit around the Earth. These satellites travel at about 9,000 miles per hour and orbit at an altitude of about 12,000 miles (for comparison the International Space Station orbits at around 250 miles). Each satellite carries an atomic clock with an accuracy of around 1 nanosecond. The satellites are distributed so that from any point on the Earth’s surface there is a line of sight to at least 4 satellites. A GPS receiver on the ground (or on an airplane in flight) receives timing and location data from these satellites on a 1.575GHz radio carrier signal.

Without Albert Einstein’s universe altering theories of relativity there would be no GPS. Crazy ideas like time slowing down with velocity, or mass bending the curvature of a four dimensional fabric called space-time are critical for GPS to work. Instead of an accuracy measured in feet (or inches for the military) it would be measured in miles without Einstein’s theories being taken into account. Not exactly accurate enough for driving directions! In fact, within a very short amount of time the errors would accumulate to the point of making the entire system useless.

These two major effects on the GPS system come straight from Einstein:
A more detailed paper (13 page pdf) is here.

When I was growing up and then in school, we talked about this, but nobody ever talked about the GPS system requiring relativistic corrections.  No one I talked to ever assumed we'd need to adjust for relativity in our work. 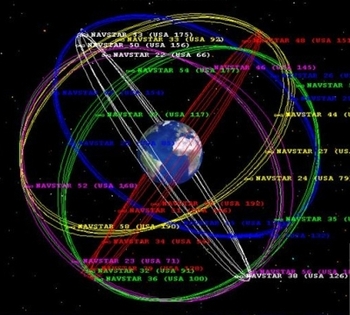 (the GPS constellation - from Wired)