A friend emailed me this link to this story of one of the last manual baseball bat makers retiring. Danny Luckett has spent over 45 years, turning Louisville Sluggers by hand on a lathe at the Hillerich & Bradsby factory.


For 45 years, nine months and eight days, Danny Luckett's office consisted of a spinning machine and a cloud of sawdust. Before retiring Friday morning, Luckett turned his final baseball bat, one of an estimated 2½ million he created during nearly half a century making Louisville Sluggers for so many of the moments burned into the sport's history.

Hank Aaron's 715th home run came with a 35-inch, 33-ounce Model A99 run through Luckett's lathe. Ozzie Smith's go-crazy-folks homer in the 1985 NLCS? Luckett and a K75 model. Joe Carter's World Series-winning home run in '93 was a Luckett-spun J93 model, and nearly every Derek Jeter plate appearance came using a P72 turned by Luckett. Every day, Luckett stepped out the door at 4:50 a.m., into the office at 5:30, inhaled the rich smell of metal shaping wood for 10 hours and witnessed his work as quickly as the same evening.

It's a poignant little story, and the craftsman's attitude shows through clearly.  At one point, Luckett says, "I take pride in what I do.  It's not just throwing a piece of wood in there and turning it."  The inevitable increasing need for production output led to more automation and more efficiency.


Luckett is perfectly content to live in the background, as he did throughout his entire career. He witnessed his craft turn to automation, with the shapes of models input into computers that now spit out bats with remarkable efficiency. A dozen bats used to take Luckett three hours to hand turn. Today's machines carve a dozen in 15 minutes. 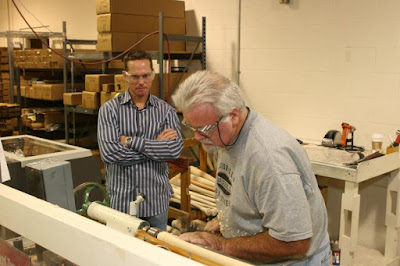 Danny Luckett at "the office" - the tool rest on his lathe.

Maybe it's just that I'm nearing retirement, but the idea of the vanishing American craftsman resonates with me.  Og posted a similar story yesterday about an old graybeard technician retiring, and I understand.  I consider myself to be at apprentice or slightly better levels in many things, from cutting metal to shaving glass and even more unusual things (perhaps "jack of all trades but master of none") and deeply value the meticulous work such craftsmen produce.  I can go into a quiet "zen zone" for a long time working on these sorts of projects.  If you scratch the surface on the topic of craftsmanship you'll soon find acres of stories of machinists, master carpenters and other craftsmen who are out of work because the companies went with cheaper ways of doing things.  As I've said numerous times, look around you: if it wasn't grown, harvested and used out of the ground, everything you see was made by someone.  Perhaps a master machinist or tool and die maker made the first ones, and then someone created the methods for making the mass quantities.  Even the mass-produced pieces usually involve someone touching them.

I like to talk about quartz crystals.  Every computer, every smartphone, every tablet, every digital watch, virtually everything electronic has at least one that controls the timing of everything that goes on inside the box.  Quartz comes out of the ground, but no piece of quartz creates the frequency that's needed right out of the ground.  The quartz is often recrystallized, but it's always cut to size, ground to frequency (thickness), mounted in holders, and tested.  Usually, someone touches every single piece of quartz that's made -- and billions are made every year.  The first ones are always made by the master craftsman; the rest are made by bulk.

Throughout the aerospace industry - and others - companies are coming to terms with a third of their workforces being eligible to retire.  It's the case at Major Avionics Company where I work, and just since the first of the year a half dozen friends and long term coworkers have retired.  It will have to lead to widespread changes in how things are done as the tribal knowledge of all the previously encountered pitfalls, traps and bad decisions leaves the company.   As Og remarked about his retiring technician, "His skills come from a different era, and are no longer being taught by anyone, and are no less important for that."  Industry will have to figure out how not to repeat the mistakes of the past.

Posted by SiGraybeard at 4:28 PM

Labels: life, Me, the big picture