SpaceX has been making headlines with its attempts to land a booster on a barge at sea, completely autonomously, and completely unsuccessfully to date, but they're not alone. The European Space Agency's contractor, Airbus has unveiled their version of a reusable booster called Adeline, the Advanced Expendable Launcher with Innovative engine Economy.  What makes Adeline innovative is it has wings and propellers that allow the engines to follow a ballistic trajectory, and then fly like an airplane back to a runway.


SpaceX and Airbus have very different methods of return, too. Falcon 9 keeps some fuel in reserve, which is used to slow the first stage's descent. Adeline detaches from the fuel tank, continues on a ballistic path, and then eventually uses winglets and propellers to land horizontally on a runway, a bit like a UAV. The main benefit of this method, at least as Airbus tells it, is that it requires much less fuel than SpaceX's method. 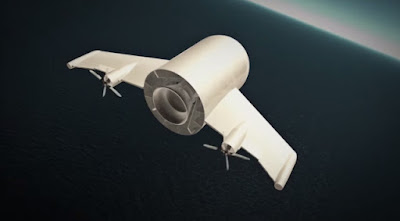 It's no big secret that launching payloads into space is still horrifically expensive.  Rocket engines are the main problem.  They're the most expensive part of a disposable expendable vehicle.   Orbital Sciences Corporation (OSC) paid around $1 billion to the Russian company Roscosmos for 20 RD-180 rocket engines.  These are the engines OSC used on the ISS supply mission that ended in a catastrophic explosion within seconds of igniting.  They're actually old engines, dating back to the Soviet Union, and after the explosive ending to that mission, OSC says they're not going to use them.  The current flight mode of jettisoning and throwing away these multimillion dollar engines after they've run for two to three minutes is one of the barriers to space flight.


All current space launch systems—SpaceX's Falcon 9, Airbus' Ariane 5, Russia's Soyuz, etc.—are expendable.  During every single rocket launch, the rocket engines and fuel tanks fall back to Earth, usually into the ocean, never to be used again.
...
This is why companies like SpaceX, and now Airbus, are developing technologies that can bring the rocket engines back to the launchpad, so that they can be reused. SpaceX, which is currently leading the charge in this area, says that it wants to reuse rocket engines and fuel tanks within "single-digit hours" of their return. Depending on who you talk to, and the configuration of the rocket, current space launch prices are somewhere around $250-500 million; with reusable components, SpaceX wants to get that price down below $100 million.

Cool?  Sure.  Interesting design idea.  I hope they succeed in lowering the costs like they say.  There were reports going around the area that the reusable boosters from the Space Shuttle program didn't really save appreciable amounts of money; they never really reduced launch costs.  Whether that was due to the incredible documentation and reliability requirements on manned space flight, or something else, I don't know.