It Seems Androids Do, in Fact, Dream of Electric Sheep

I'm having a bit of problem with my mind being so completely blown that I don't know where to start, but a friend sent a link to a Guardian article of essentially the same title.  The story concerns research from Google labs about training the neural networks used for image recognition.  Neural networks are a form of computer processor architecture that were created in attempt to mimic the way brains are organized.  A neural network usually involves a large number of processors operating in parallel, each with its own small sphere of knowledge and access to data in its local memory.

These networks have to be trained, and that's typically done by showing them lots of images of the things they're being trained to recognize.  That works to some extent, but the researchers want to know what's going on at each step of the process so that they could optimize the way the programming works.


We train an artificial neural network by showing it millions of training examples and gradually adjusting the network parameters until it gives the classifications we want. The network typically consists of 10-30 stacked layers of artificial neurons. Each image is fed into the input layer, which then talks to the next layer, until eventually the “output” layer is reached. The network’s “answer” comes from this final output layer.

One of the challenges of neural networks is understanding what exactly goes on at each layer. We know that after training, each layer progressively extracts higher and higher-level features of the image, until the final layer essentially makes a decision on what the image shows. For example, the first layer maybe looks for edges or corners. Intermediate layers interpret the basic features to look for overall shapes or components, like a door or a leaf. The final few layers assemble those into complete interpretations—these neurons activate in response to very complex things such as entire buildings or trees.


“One way to visualise what goes on is to turn the network upside down and ask it to enhance an input image in such a way as to elicit a particular interpretation,” they add. “Say you want to know what sort of image would result in ‘banana’. Start with an image full of random noise, then gradually tweak the image towards what the neural net considers a banana.”

In other words, they generate a set of random pixels and feed it into the algorithm.  The output has some features that are more reminiscent of bananas than before so they use that as the input and run the algorithm again.  Eventually, they get something like this:

That doesn't look like a photo of bananas, but it's more like bananas than the original input.  In one interesting example they asked the network to find weight lifters' dumbbells.  The resulting image always had portions of an arm holding the dumbbell!  The network learned to recognize them, but so many of the training photos had a muscular arm holding the dumbbell, it assumed the arm was part of the dumbbell.  The solution might be to just give it many more images that don't include an arm, so that it learns the arm isn't part of it.

The surprise to me was the stunning, beautiful abstract art the networks are creating.  The Google labs team says,


If we apply the algorithm iteratively on its own outputs and apply some zooming after each iteration, we get an endless stream of new impressions, exploring the set of things the network knows about. We can even start this process from a random-noise image, so that the result becomes purely the result of the neural network...

If the network is being trained to recognize buildings, and random noise is fed in, with some zooming and selecting of areas to work on, you eventually come up fantasy-impressionistic landscapes like this one 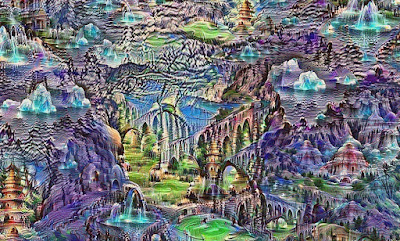 Fountains, pagodas, arches, aqueducts, and ponds with fountains - or icebergs.  It's reminiscent of an album cover from the days of widespread hallucinogens.  More incredible eye candy at this gallery.

As the Guardian says,