DAC - the Design Automation Conference - is one of the many electronics trade shows held each year.  These aren't as well known as CES - The Consumer Electronics Show - and don't get as much press or cable news coverage.  This year's show was last week, June 7th to the 11th.

Last week, EDN reported on DAC and showed a really cool idea from Google's X project team, the guys charged with thinking big and trying for projects that other companies might not be able to do.  A disposable contact lens that measures glucose in tears (a scaling offset away from blood sugar levels) and reports it by RFID radio link to a data collector. 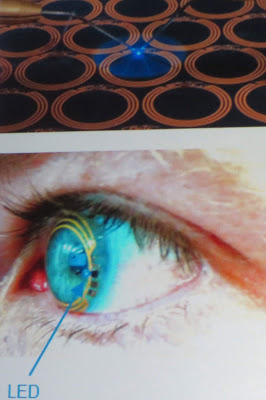 Google's Brian Otis explained that current invasive monitoring methods are only used by the relatively small number of people who have type 1 or 2 diabetes, but many more could benefit, whether pre-diabetic, genetically predisposed, or overweight. Frequent non-invasive monitoring could help delay the onset or prevent diabetes from manifesting, and could even be used for "lighter" applications, like athletics and weight loss. Google sees bringing this technology to 100 million users. [emphasis added: SiG]
...
The system employs RFID for communications between its SoC (System On a Chip) and a reader, but is powered from a local micro battery so that it can perform a full day's monitoring and logging,...

The platinum glucose sensor uses a glucose oxidase enzyme to convert sugar to hydrogen peroxide. An eye's tear film has about 2% the glucose level as blood.

Just based on statistics, I know that some of you are measuring your blood sugar with today's glucometers.  You stick your finger, draw a drop of blood and wait a few seconds for a reading.  Imagine never having to do that again.  Imagine being able to track your response to a new type of meal without having to stick yourself over and over again.

Take a look at that eye model again.  See the three dark squares where the yellow rings come together on the right?  That's the complete system including, power storage capacitors, the SoC microcircuit, glucose sensor, and a battery.  Although they don't talk about the battery in the conference, perhaps it's something like this? 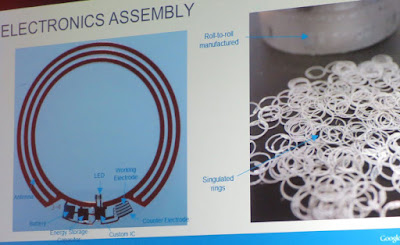 I don't wear contacts, never have, but this is a pretty neat innovation.  A real reflection of what engineering is all about: making things better.