Bill Nye The Stepped In It Guy

This is probably not news to you, but Bill Nye "The Science Guy" who makes a living doing basic science instruction for school-aged kids, is not a scientist.  He's a mechanical engineer.  Non-engineers probably aren't aware that most places with a large complement of both electrical and mechanical engineers usually have good-natured running dialog of jabs going between the two types of engineers.  I'll forgo that sort of joke aimed at Bill.

Mostly because Nye has made a joke of himself.

Yesterday, Nye linked the fact that a wimpy tropical storm (coincidentally also named Bill) was going ashore in Texas and there are some wildfires in Alaska to global warming.

<Blink, blink... Checks watch.>  Bill, old man, it's June.  That means it's hurricane season.  A tropical storm in June is about as rare and noteworthy as a rush hour traffic jam in New York City.  To be honest, a tropical storm in the Gulf in May or December wouldn't really draw many raised eyebrows, either.

What might be a little more surprising than a doctrinaire warmist like Nye making the stupid mistake of blaming entirely normal weather on climate change is that a group of people who really know what they're talking about took him to task for that.  Joe Bastardi is well-known meteorologist, Chief Forecaster at WeatherBell Analytics, and also forecasts for Accuweather.


Joe Bastardi Are you crazy. Linkage to 50s and MJO textbook! Do you have any clue about what you are saying? pic.twitter.com/Jv2qjc6N4O


@BigJoeBastardi  @BillNye Have you even looked that the objective analysis of SST parallels to 1950s. Have you read Vitart on the MJO and TC development?

A researcher I've been following since becoming aware of his work while he was still a Ph.D. student at FSU:

For those keeping track, the US hasn't had a major hurricane (defined as category 3 and above) since Hurricane Wilma in October, 2005.  Those who study hurricanes for a living (like Dr. Maue) say there is no correlation between "climate change" and hurricanes. 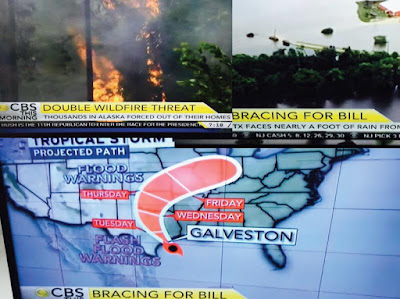