Is A Major Finanical Collapse Imminent?

Blogger Michael Snyder at ETF Daily News thinks so and posts a pretty sound circumstantial-evidence case that it's going to happen.   Circumstantial evidence is all we ever get, by the way.


Based on information that I have received, things that I have been told, and thousands of hours of research that have gone into the publication of more than 1,300 articles about our ongoing blog, I have come to the conclusion that a major financial collapse is imminent.  Therefore, I am issuing a RED ALERT for the last six months of 2015.

For the record, last January, I wrote much the same, so he and I see the same sort of timing.  He says in the second half of the 2015, I narrowed it down to the end of the Federal fiscal year, because most other market crashes happen in within a month either side of October 1.


The proverbial black swan could fly in at any time in the guise of a really bad attack like the Charlie Hebdo massacre here in the US, or worse.  On the other hand it could sit like this for quite some time.  Given the timing of other market crashes, my bet is on next September or October.

In a list of things that could be the contributing event to collapse, the author points out a few interesting things.  He points out a story I missed in Reuters that the EU has ordered 11 countries so have "bail-in" rules (fancy term for confiscation of your bank account) within two months (making it July 28) or they will face legal action.  Pretty sharp and short deadline.  Are they expecting something?

In the rest of his list, he points out additional ammunition for my September prediction.
There's an additional set of arguments here that rely on biblical prophesy.  He goes into a couple of angles on that and points out something interesting in the recent pattern. The number seven and multiples of seven are prominent.  First, I must explain that in Jewish history, the Shemitah is the 7th year of a cycle.  Much like a seven day week, the Shemitah year was like a sabbath; fields were to lie fallow, and debts were to be forgiven - something foreign to today's world of 30 year mortgages and other long obligations.  Every seventh Shemitah year (every 49 years) is a year of Jubilee, where every Jew was expected to return to their property and their family.


On September 17th, 2001 (which was Elul 29 on the Biblical calendar), we witnessed the greatest one day stock market crash in U.S. history up until that time.  The Dow plummeted 684 points, and it was a record that held for exactly seven years until the end of the next Shemitah cycle.

On September 29th, 2008 (which was also Elul 29 on the Biblical calendar, so exactly seven years later by that calendar), the Dow fell by an astounding 777 points, which still today remains the greatest one day stock market crash of all time.  [777 is a Biblical number itself, said to be a sign of perfection - SiG]

September 13th of this year is Elul 29 on the Biblical calendar – the last day of the Shemitah year, again exactly seven years later by that calendar, many are concerned about this date because we have seen giant stock market crashes on the last day of the previous two Shemitah cycles.

For one thing, we can absolutely guarantee there will be no market crash on September 13th.  It's a Sunday; the markets are closed.  Aside from that, the piece is worth reading.  I'll note that there are several links to the Economic Collapse Blog embedded in that article that are not working today.  I suspect they're having some problems. 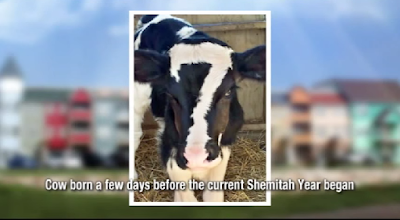 In what has to be the freakiest example of a "you can't make this stuff up" event, two cows were born with the number 7 on their head at the beginning of this Shemitah year; one in Pennsylvania (named Baby Ben after Steelers' QB Ben Rothlisberger) and one in Texas - a red heifer.  How rare is this?  That is, how many calves are born every year with markings like the number 7?  I couldn't tell you.

Am I losing it?  Have I already lost it?  The times between the previous crashes and their place on the calendar simply "are what they are".  Whether they mean something is happening this year on Elul 29, the Shemitah, or on the blood moon eclipse on September 25th, or if the markets are going to collapse at all is the leap you must make.

Posted by SiGraybeard at 4:12 PM