It Really Is Religion

When Pope Francis released his encyclical that included strict-global warming doctrine the other day, the talk was about how it was all about reasoned discourse.  On the Sunday talk shows, Cardinal Donald Wuerl of Washington explained:


[Pope Francis is] saying, "Why don't we all discuss this? Why don't we all come to the table, and before we start eliminating other people from the discussion -- before denouncing them or even ridiculing them -- why don't we listen to them and see what they're saying and see where we really ought to be going as a human family?"

Except that statement doesn't appear to be true.  It seems that "eliminating other people from the discussion" is exactly what they're doing.  French climate change skeptic Philippe de Larminat says he was denied a spot at April's summit sponsored by the Vatican’s Pontifical Academy of Sciences.


De Larminat has written a book arguing that the sun, and not human activity, is the primary cause of climate change

"They did not want to hear an off note," de Larminat told the paper.

Doesn't quite agree with the Cardinal's talking points, does it?  It's more like this: 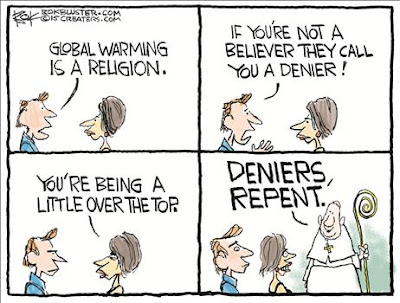 It looks to me like good old Latin American Liberation Theology, think Jeremiah Wright, is mainstream in the Catholic Church these days.