This Week In History

This week, a milestone for music techno-geeks passed.  June 9 would have been Les Paul's 100th birthday.  Les died 6 years ago, at 94, of complications from pneumonia.  That link is to electronics trade magazine EDN, who publishes a good biography for people who aren't familiar with the name.


Born June 9, 1915, in Waukesha, WI, Lester Polfuss--who would later use the stage name Les Paul--started inventing at an early age. As a teen, he developed a harmonica holder fashioned out of a coat hanger that allowed him to flip his harmonica with his chin while also still playing his guitar and singing. Harmonica holders available at the time required that the user manually remove the harmonica from the holder and reposition it.
...
While continuing to play music, Paul began experimenting with electronics and amplification in the early 1940s because he disliked the hollow bodies on the then-current electric guitars. He believed their vibration led to a thin tone and feedback.

Paul created one of the first solid-body electric guitars in 1941. He built “The Log,” as he called it, a 4" × 4" chunk of pine with strings and a pickup, after-hours in the Epiphone guitar factory. One of the first solid-body electric guitars, it was basically a wooden board with a guitar neck to which he attached strings and two pickups. Check it out in the video below.

With advances he made in multitrack engineering, tape delay and echo effects, and overdubbing, Paul was also responsible for changes in the way music was recorded. He invented an effects-generating synthesizer called the “Les Paulverizer” in 1949, and he developed the eight-track tape recorder with Ampex, which was introduced in 1952.

From what I've been able to find out, Les was the consummate geek; always hacking guitars, amplifiers, recording instruments and everything else.  He was frequently seen with experimental guitars; new pickups tacked into places not originally intended for them, new switches or controls tack-soldered in place.  It's widely said that much of modern rock music was born from this geek's ideas.

Shortly before his passing, Slash, Billy Gibbons (ZZ Top) and some other top-tier rock guitarists gathered to pay homage to him, although Les played country music himself.  Video at Rolling Stone - which wouldn't embed.

Since the Les Paul name and trademark have belonged to Gibson since the first ones went into production in 1952, their website currently has several pieces up pertaining to his birthday.  They ran a couple of special promotions associated with it, too. 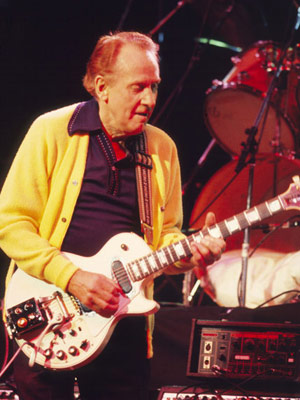 Les in a photo I couldn't put a date on, with one of his "Franken-guitars".  The guitar, at least, is no stock Les Paul.

YouTube is full of videos of Les, but I'm kinda fond of this 30 second Coors commercial.