The Extent That the Central Bankers Distort the World

At the start of May, I did a post on James Rickards and some sage words he had on "That Whole Coming Economic Collapse Thingy".


He'll be among the first to tell you that financial collapse could happen this week or in a decade.  It's impossible to tell.  In many ways, it's like an avalanche: it's impossible to blame the avalanche on any particular snowflake, but any one of the continuing snowflakes could cause it.  What's it look like?  The only "bank" with any solvency left is the International Monetary Fund.  The IMF has Special Drawing Rights, SDRs, that would allow it to prop up the world when the collapse happens.  His most likely scenario would be that all banks around the world, all banks, would be shuttered.  After some time, perhaps a few days, perhaps a week, everyone would be able to withdraw 250 or $300 a day for food and energy expenses.

I mentioned his book, "The Death of Money", and have been reading it when I get a few minutes here and there.  I have to say I'm learning interesting things in every chapter.  Enough to get to the rare point of recommending it before I'm done reading it. 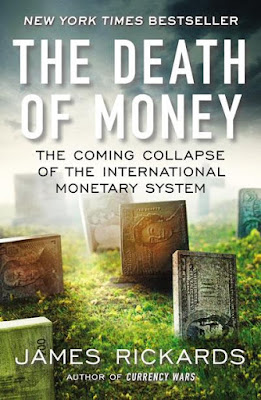 The latest chapter I'm reading goes into some of the ways the Fed has been distorting the economy and markets.
A lot of this really is transferring wealth from you and me and the economy at large to the banks.  We hear people complaining about the "banksters" all the time, but I don't see banks doing anything that they're not being strongly encouraged and rewarded to do by the Fed.  The Federal Reserve and the other central banks are the real "banksters".   And they wouldn't be able to do it if not for their government enablers.

This is just a few paragraphs from a single chapter in James Rickards' book.  It starts with a fascinating look at economic terrorism that's full of things I've never seen before.  If you find this stuff interesting, I recommend it.