A Year After the "Great Eclipse", A Feel Good Story

There's a line from a Dilbert cartoon about web "surfing" being less like surfing and more like bouncing from place to place like a ping pong ball in a clothes drier, and so I ended up at Inc. Magazine, running into a feel-good story about last August's Great American Eclipse and a photographer determined to photograph it from a plane.


(Jon) Carmichael, 32, is a professional photographer whose clients have included Twitter, Elton John, and even the Dalai Lama. He's also a self-described "big space nerd" who first realized during seventh grade that he'd have the chance to live through a total solar eclipse.

Jon's specialty is taking tons of pictures and combining them into a really big, special image.  Like all photographers, Jon instinctively knew that the angle and the situation was everything, and quickly realized that a wide angle shot from a high altitude would bring out the ethereal, soul-touching nature of the eclipse.


He started scouring other flight times and paths, and saw that Southwest flight 1368 from Portland to St. Louis might just be perfect. He flew out from New York to take it, but then realized he had a problem.

He needed a window seat, but his boarding pass on the open seating flight put him in Group C. Solution: He brought $600 in cash, to pay off other passengers.

Fortunately, no bribes were needed. Carmichael told me he introduced himself at the gate to the Southwest employees, and they immediately bought into his plan. They bumped him up to first in the boarding line, and the captain, Jeffry Jackson, even cleaned the outside of the window at Seat 1A so that Carmichael would have a clear view.  [Emphasis added - SiG]

I've never flown Southwest, but have heard that they work differently than most airlines.  First off, they seem to allow their employees more latitude in working with customers.  A story about going out of their way to please a customer is how I bounced into this one.  Second, seating is first come, first served; this is the reason he was bringing $600 to buy a window seat from someone - an attempt to buy a window seat.


The only way I can do this, shooting through a little 8-inch window," Carmichael told the captain, "I need a 180-degree view. So, can you possibly turn the plane around when we're in totality?"

"Don't get your hopes up," Jackson replied. But he did get approval, and the plane wound up doing five 180 degree turns at full totality. (A video at the end of this article includes the flight path.)  [Note: any sort of change from a normal flight path would require air traffic control approval - SiG]

"Within a matter of seconds, it goes from broad daylight to completely nighttime," Carmichael recalled. "Everybody just kind of gasped and went silent. And I'm just focusing on getting these shots. I'm utilizing everything I've ever learned with photography in my career, in these two minutes of time...I took over 1,200 photos."


It took Carmichael most of the year to combine those photos into the one image he was striving for; the final image shows the eclipse just as the plane passes over the Snake River, separating Oregon from Idaho.   You'll note in the first paragraph I excerpted that he has worked for Twitter, and when the company learned about the project, they used their infrastructure to unveil the photo to all of their offices first

And without further delay... 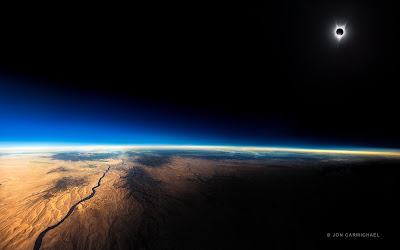 I can't get a version bigger than that, but I suspect he's selling them.  SW made a little promotional video about the story, which is, well promotional, but still worth a look.