A group of researchers at Los Alamos National Labs has developed a simple new way to produce a tight sonar beam for imaging through soil, rock and pretty much anything.   Summary from Machine Design:

The trick ended up being fairly simple.  They put the piezoelectric disk that generates the sound into a fixture that clamps it along its circumference. 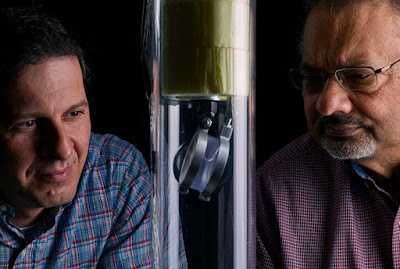 By simply clamping the circumference of a piezoelectric disc inside a hard material and exciting concentric ring-like ripples in the disc, the team determined that it could produce a highly collimated, powerful sound beam that also minimizes unwanted side lobes.

The resulting device, called ACCObeam, operates at a low frequency of 10–250 kHz, so the sound it produces does not attenuate significantly in any medium. In fact, ACCObeam is capable of imaging underground in almost any medium and has been shown to image two to three meters of rock without compromising image resolution.

10 kHz is going to be lower resolution than 250 kHz (higher frequencies are always shorter wavelengths, and resolution depends on the physical size of the waves - sound or radio), but the narrow 6 degree beamwidth and lower sidelobes help the performance as well.  For comparison, you may have heard of the sonar "fish finders" that have become essential equipment for most fishermen, and are on millions of recreational boats.  Those are ultrasonic sonars, too.  The fishing sonars work at twice the highest frequency of the ACCObeam as their low frequency ends, not quite 500 kHz, more like 450 kHz, 800 kHz for their narrow beams, and are now pushing above 1000 kHz for higher resolution imaging.

LANL produced a well done little video that shows some details about the ACCOBeam and how it could be used for oil wells, fracking, and other energy industry-related tasks, which is LANL's reason for being.

Still, this isn't a fishing sonar, and while the commercial grade sonars have capabilities that ACCObeam doesn't, direct comparison isn't fair.  These are different tasks, and the LANL scientists are looking for applications where it fits better than existing technology.

My only gripe about the story is they shared no images captured through rocks or ground.  The video is worth watching, though.