But you probably figured that was the case before now.


Take for instance the Ford sexual assault allegation. Grassley has given Ford until tomorrow to commit to a testimony that would be conducted in the next 72 hours. He wants it complete by Monday so they can move on with a committee vote. But Ford and her lawyer are delaying. They want the FBI to do an investigation, but procedurally that's not how this works. Ford's lawyer, Debra Katz, knows this. So why delay?

Well, it's pretty obvious. Again, the Left isn't trying to hide what they're doing here. Democrats want this delayed as close to the November midterms as possible. They study history just like anyone else does. When this nearly identical scenario happened with Clarence Thomas and Anita Hill back in 1991, it triggered what is now known as "The Year of the Woman" in the 1992 elections. Dianne Feinstein, the ranking Democrat on the Judiciary Committee, was a product of that Democrat surge.

But the Ford accusation reveals a lot more. Back in August, a large group of Left-leaning groups co-signed a letter to both Senator Feinstein and Senator Grassley demanding Kavanaugh records. It was basically the same narrative that Cory Booker and Kamala Harris were using during the opening day of the confirmation hearing. One of the groups that co-signed the letter was called the Project on Government Oversight, or POGO. The vice chair of POGO is a woman named Debra Katz - YES - the same Debra Katz that is now the lawyer for Kavanaugh's accuser. Don't worry, this gets even more ridiculous. POGO is directly funded by - guess who - George Soros and the Open Society Foundation.

As Glenn says, you have to respect them - in the same sense you'd respect a Great White Shark as a ruthless killer.  They've laid all their cards on the table in a constant barrage of theatrics from Booker's "I am Spartacus" moment to Kamala Harris' demanding documents she already had, to shouting down opponents, to shady plots involving big money donors advancing progressive agendas. This is truly a look inside the Left's political playbook. It's open for everyone to see, the sides have been chosen and they don't even really appear to care about hiding it.

Aesop has created this graphic based on a quote from Gun Free Zone, which then got picked up by Western Rifle Shooters Association: 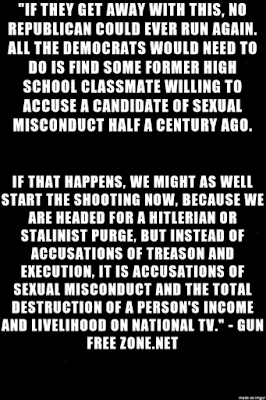 The thing is, that first paragraph isn't a bug, it's the feature.  It's what they want.   They want to make the cost of opposing them so brutal that no one will take the job.  They're campaigning on maximum tyranny, biggest government, and taking away freedoms.  They've all but guaranteed they'll rescind the tax cuts.  They've all but guaranteed they will vote to impeach Trump if they win the House.  Over what?  They don't think it matters.  They think all they have to do is make the charge, like Dr. Ford's charge against Kavanaugh.

George Soros is at the heart of funding most of the tyrannical movements in the world today; always with a name opposite of its goals, like the Open Societies Foundation.  He has open arrest warrants in several countries and has been banned from others.  Why do we allow him to fund so much crap in this country?