Most Exalted President for Life Xi has begun to enact the classic communist policy of "No God Except the State" with a crackdown on churches nation wide.  Christian churches are being shut down, demolished, bibles are being burned and Christians being required to denounce their faith in order to remain in society.


Under President Xi Jinping, China’s most powerful leader since Mao Zedong, religious believers are seeing their freedoms shrink dramatically even as the country undergoes a religious revival. Experts and activists say that as he consolidates his power, Xi is waging the most severe systematic suppression of Christianity in the country since religious freedom was written into the Chinese constitution in 1982.

Fu also provided video footage of what appeared to be piles of burning bibles and forms stating that the signatories had renounced their Christian faith. He said that marked the first time since Mao’s radical 1966-1976 Cultural Revolution that Christians had been compelled to make such declarations, under pain of expulsion from school and the loss of welfare benefits.

A Christian pastor in the Henan city of Nanyang said crosses, bibles and furniture were burned during a raid on his church on Sept. 5. (AP)

Most of you have probably heard of the Surveillance State mechanisms in China, using omnipresent cameras and facial recognition software to track people everywhere and in every social or business transaction they make, so that a "Citizen Score" can be calculated.


Your “citizen score” follows you wherever you go. A high score allows you access to faster internet service or a fast-tracked visa to Europe. If you make political posts online without a permit, or question or contradict the government’s official narrative on current events, however, your score decreases. To calculate the score, private companies working with your government constantly trawl through vast amounts of your social media and online shopping data.

Christians are being given a form to sign renouncing their faith and pledging worship to His Royal Exalted Presidential Dictator for Life.  If they refuse, the penalty doesn't appear to be physical death, at least not today.  It appears the Party sets their citizen score to a low value, making it so they can't keep a good job, and their children can't get into a good school. Your choice would appear to be to abandon your children or lie about your faith.

They don't appear to be following the policy of sending Christians to internment camps for re-education, as has been reported about Chinese Muslims.  It may be they simply don't have enough space and are using the camps for what they regard as the bigger threat.  According to the Wiki, there's about 20.5 million Muslims in China.  In 2011, the Pew Forum on Religion & Public Life estimated over 67 million Christians  in China (pdf warning).

My gut feeling is that this will drive churches underground, where they will survive or probably thrive  - which is the historical norm, after all.  The China.gov says they're simply trying to "sinicize" the faiths; making them more Chinese.  Faiths don't tend to go along with having their central tenets thrown out.  In particular, they don't like their God being replaced with a living politician. 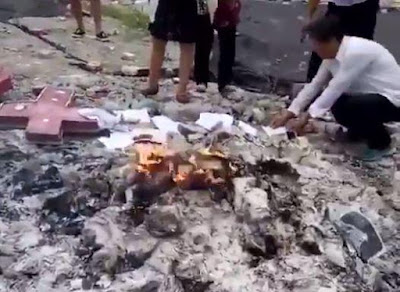