Another Obama-era EPA Ruling Shut Down

Back in 2015, Obama's EPA issued a rewrite of the Clean Waters Act of 1986 to give the agency more control over our lives.  The Clean Waters Act initially limited the federal government to regulating the “navigable waters of the United States”; waters like the Ohio, Mississippi or Colorado Rivers, or the Great Lakes.  In 1986 the EPA expanded that definition to seize control over tributaries and adjacent wetlands. They've now expanded the law to introduce the concept of a “significant nexus to a navigable waterway”.

The concept behind this is an example of the worst kind of junk science that agency detractors despise.  In a 2013 article on the New American, they talk about the paper the EPA was using as justification.  The paper, which was not peer reviewed at the time, said all the waters in the world are connected.  This gave them the authority to say a puddle on your property or a stream that only carries water for a short period in a year can eventually end up in the "navigable waters of the United States".


In September, the EPA issued a draft scientific study purporting to find that virtually all wetlands and streams are “physically, chemically, and biologically connected” to downstream waters over which the EPA already claims authority. Moreover, says the EPA study, even many “ephemeral streams” and “prairie potholes, vernal pools and playa lakes” that are dry most of the year can be found to have some connectivity to downstream waters.

According to Legal Insurrection blog, the so-called Waters of the US ruling was shelved by US District Court Judge Lisa Godbey Wood last week.


More than nine months after the last hearing in the case, and nearly nine months to the day of the briefing deadline for that hearing, U.S. District Judge Lisa Godbey Wood handed a victory to the state of Georgia and nine other states that sued the federal government over the Obama administration’s 2015 Waters of the United States Rule.

Wood stated that the rule, which was intended to provide better protection of the nation’s water, violated the Clean Water Act and the Administrative Procedure Act, and she remanded it back to the Environmental Protection Agency and the Army Corps of Engineers for further work.

She wrote that while the agencies have authority to interpret the phrase “waters of the United States,” that authority isn’t limitless, and therefore their decisions in doing so do not fall under what’s called Chevron deference, a matter of case law in which — for lack of a better phrase — the tie goes to the agency.

Readers may recall hearing that implementation of the rule led to a Wyoming farmer being fined $37,500 a day for constructing a stock pond on his own property.  The farmer eventually won his case against the EPA in 2016.

So while Judge Wood ruled sensibly, the EPA act is still alive just bleeding out.  To begin with, the ruling only affects the states that are parties to the case she ruled on — Georgia, Alabama, Florida, Indiana, Kansas, Kentucky, North Carolina, South Carolina, Utah and West Virginia. (Wisconsin was a party to the suit but dropped out in April.)  There are other cases going through other courts that may use this precedent but may not.  Second, as it says above, she sent the law back to the EPA and Army Corps of Engineers to define things better.  The ultimate answer is this needs to go back to congress to give a better definition for the Clean Waters Act.


“The Obama-era WOTUS rule threatened Iowa’s farmers, manufacturers, and small businesses by giving the federal government authority to regulate water on 97 percent of land in our state,” said U.S. Senator Joni Ernst. “President Trump and his administration have taken tremendous steps to roll back this far-reaching regulation and provide for more certainty with a new, clearer definition of WOTUS. But it’s the job of Congress to make a new, reasonable definition permanent, and that’s what this bill does—it ensures more predictability and workability for Iowans for years to come.” 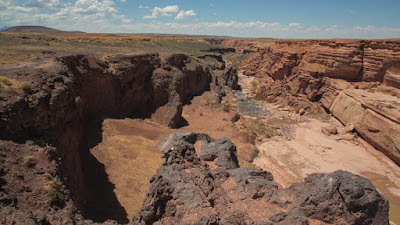 Dry river bed in Arizona, from Shutterstock. According to the EPA, this is "the waters of the US" and subject to their regulation. The scary part is this makes more sense than other waters they claim.