As previously claimed, the EPA today released a rewrite of the Clean Water Act of 1986 to give it control of every body of water visible to the naked eye, down to and including large puddles.  In doing so, they enlarged the law from an "anorexic fashion model-sized" 88 pages to an engorged tick of 2200 pages.   They did this under the guise of "just clarifying the laws".

In doing so, they relied on some amazingly junky science.

The Clean Water Act initially limited the federal government to regulating the “navigable waters of the United States” like the Ohio, Mississippi or Colorado Rivers, or the Great Lakes.  In 1986 the EPA expanded that definition to seize control over tributaries and adjacent wetlands. They've now expanded the law to introduce the concept of a “significant nexus to a navigable waterway”.  Insty explains:


The agency defines waters as “significant” if they are “located in whole or in part within 100 feet of the ordinary high water mark,” or, alternatively, within the 100-year floodplain and 1,500 feet of the high water mark of waters already under the government’s jurisdiction. That’s already a lot of water, but there’s more.

The EPA acknowledges that the “science available today does not establish that waters beyond those defined as ‘adjacent’” to these significant” waters should be regulated. But forget science. The agency says its “experience and expertise” show there are “many” other waters that could have a significant downstream effect. Thus the EPA establishes an additional standard for significance that covers just about anything that’s wet.

I remember reporting on their efforts to do this years ago, and found a piece in 2013. The EPA issued a paper, which was not peer reviewed at the time, saying all waters in the world are connected.  This gives them the authority to say a puddle on your property can drain into a creek and eventually end up in the "navigable waters of the United States".


In September, the EPA issued a draft scientific study purporting to find that virtually all wetlands and streams are “physically, chemically, and biologically connected” to downstream waters over which the EPA already claims authority. Moreover, says the EPA study, even many “ephemeral streams” and “prairie potholes, vernal pools and playa lakes” that are dry most of the year can be found to have some connectivity to downstream waters.

This is the most ridiculous kind of pop eco-science, pure junk science that can be invented.  How does one measure that?  How can you be certain that water in a creek or pond hundreds of miles from one of these navigable waterways ends up in them?  How do they know it just doesn't evaporate and leave whatever they're afraid of as residue on the land?  How could they measure that movement?  How long would it take to measure that well enough to know?  Underground rivers generally move quite slowly (I know there are exceptions, but they're rare).  Ground water moves even slower. Would it take centuries to measure it?  Millennia?

Add this to their junk science about CO2, shutting down the coal power plants for the modeled-but-never-measured global warmening, their absurd claims about freon and ozone holes, ozone pollution, regulating outboard motors and lawnmowers to be as clean as cars, or their equally absurd claims about DDT and I see an agency that clamps onto whatever junk science fad is running around and issues regulations before anything is truly known.  "We need to regulate now!  We can't wait until we have proof!!", as all the warmists used to say in the 1980s.  It's the motto of tyrants everywhere. 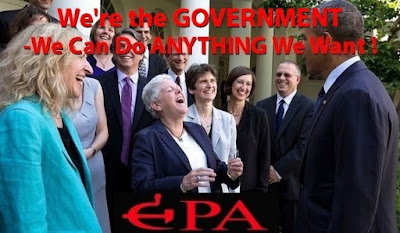