To some degree.  I read it as a massive attempt to save face, but The Academy of Nutrition and Dietetics issued a statement about the 2015 Dietary Guidelines for Americans saying that they applaud the Dietary Guidelines Advisory Committee (DGAC) for "drafting a strong, evidence-based" report:


"Despite some criticism suggesting that changed recommendations illustrate concerns about the validity of the nutrition science upon which the Dietary Guidelines are based, the DGAC should change its recommendations to be consistent with the best available science and to abide by its statutory mandate," Connor said.

What exactly are they talking about?

You may have read that the new Dietary Guidelines (My Plate or Food Pyramid or the Dietary Icosahedron - whatever they're using this time) have finally admitted for the first time that the evidence for the Diet-Heart Hypothesis just hasn't turned up, despite searching for it for almost 60 years.  Not to mention carrying out medical experiments to find this link on unsuspecting Americans (and to a lesser extent, the rest of the world).


In comments recently submitted to USDA and HHS, the Academy supports the DGAC in its decision to drop dietary cholesterol from the nutrients of concern list and recommends it deemphasize saturated fat from nutrients of concern, given the lack of evidence connecting it with cardiovascular disease.  [Emphasis added - SiG]

The Fed.gov (Department of Health and Human Services and the Department of Agriculture) have finally admitted that having your morning bacon, with a couple of eggs instead of a bowl of cereal isn't going to harm your health.

Wait - it gets better.  Or worse depending on your point of view.


The Academy also expresses concern over blanket sodium restriction recommendations in light of recent evidence of potential harm to the overall population. "There is a distinct and growing lack of scientific consensus on making a single sodium consumption recommendation for all Americans, owing to a growing body of research suggesting that the low sodium intake levels recommended by the DGAC are actually associated with increased mortality for healthy individuals," Connor said.  [emphasis added again - SiG] ["Connor" is Academy President Sonja L. Connor]

Got that?  The salt intake levels that Michael Bloomberg, Michelle Obama, the FDA, and the previous versions of the Dietary Guidelines have been shown to harm people, not help!  "Sorry if we killed you, buddy.  We thought we knew what we were doing. "  Sodium is one of the most essential minerals to the body.  We all have heard the saying that someone is "worth their salt"; that's because soldiers (and others) used to get paid in salt.  It's where the word "salary" comes from!  So while it has been empirically observed that there can be a 10-fold difference in vitamin absorption between people, there's one number for the sodium every person needs?

Without going too deep into the rabbit hole, it's generally recognized that by the 1930s, obesity research was focusing on carbohydrates.  Most of this work was in Europe.  World War II wiped out those universities, and the studies were all in other languages, so that when American researchers started on diet/health issues, they simply made the wrong choice.  They could have gone after fat or sugars and they chose the wrong one.  The Academy of Nutrition and Dietetics seems to address that, too:


The Academy supports an increased focus on reduction of added sugars as a key public health concern. "Among the identified cross-cutting issues, the evidence is strongest that a reduction in the intake of added sugars will improve the health of the American public. The identification and recognition of the specific health risks posed by added sugars represents an important step forward for public health," Connor said.

While it's encouraging to see the science being updated as the data changes, it's very, very overdue.  In a way, this is bad news.  It's a simplifying thing in life to have one nutritional bad guy to avoid, be it dietary fat or salt.  In reality, life is too complex for that.  Salt does effect some people's blood pressure, but that appears genetic; for the rest of us, it has no effect.  There is some correlation between various ratios of the blood lipids and heart disease, but the situation is much more complicated than "high cholesterol will kill you", an idea that's pushing 60 years old, and even more complicated than "too high a ratio of LDL to HDL will kill you", or that LDL is "bad cholesterol" and HDL "good" are ideas that are about 25 years old.  The idea that dietary cholesterol doesn't affect circulating cholesterol (much) so everyone needs to restrict saturated fat to reduce blood cholesterol goes back about 40 years.  Today, it's recognized that there are many different types of LDL that are differing degrees of "bad"; some seem to be fairly benign.  There have even been studies that showed elevated cholesterol to be associated with longer life for women and elderly people.  Not something to be avoided, it's something that's good for you.  As we've learned more, the situation has increased in complexity, and the previous dietary guidelines were too simplistic.

There have literally been hundreds of studies on these subjects, and at least a dozen books written for the non-scientist.  If you're interested, I heartily recommend, "The Big, Fat Surprise" by Nina Teicholz; "Why We Get Fat and What To Do About It" by Gary Taubes; or "Good Calories, Bad Calories", also by Gary Taubes.  "Good Calories, Bad Calories" is the earlier book, and is mostly the science with painstaking references.  "Why We Get Fat" is a more practical book.  "The Big, Fat Surprise" is equal parts history and biographies, with major emphasis on the personalities.  The most recent of the three, she summarizes Taubes' work and extends them with interesting new data. 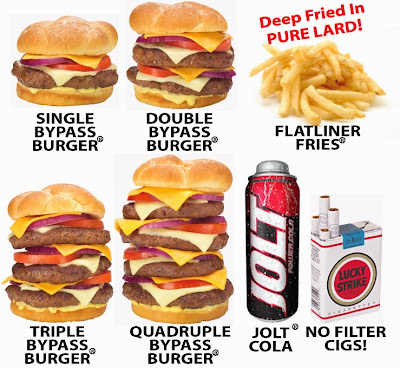 Of course this means that the Heart Attack Grill can't use this advertising meme.  There's no association between cheeseburgers and heart disease.  Never has been.  They're just another cheeseburger in a world full of them.