Techy Tuesday - The Future of Windmills May Be Losing the Blades

Ordinarily, when a structure shakes in the wind, it's a bad thing.  Perhaps the most famous example in history is the collapse of "Galloping Gertie", the Tacoma Narrows bridge in Washington, 1940, and that's a pretty extreme example.  Probably everyone has heard the wind cause powerlines to make sound, or felt things moving in the wind.  Everyone who has ever sailed a boat has felt it.  In virtually all situations, the wind-induced motion is undesired.  Some structures, like telescopes, spend a lot of engineering effort to eliminate that motion.

I bet you never thought of that motion as energy that could be captured to do something useful.  Researchers in a small start-up company in Spain are working on that very idea. The company's called Vortex Bladeless, and its wind energy harvesters don't look like the giant windmills we're used to.  They look more like giant stalks poking out of the ground. 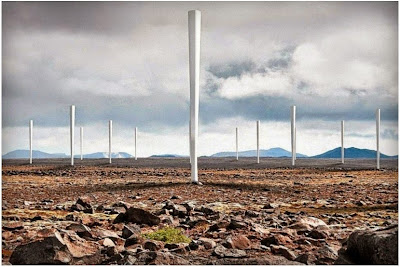 The mast design is being optimized to create vibration in the wind; at the bottom, that vibrational energy drives a mechanical alternator that turns mechanical energy into electrical.


The Vortex’s shape was developed computationally to ensure the spinning wind (vortices) occurs synchronously along the entirety of the mast. “The swirls have to work together to achieve good performance,” Villarreal explains. In its current prototype, the elongated cone is made from a composite of fiberglass and carbon fiber, which allows the mast to vibrate as much as possible (an increase in mass reduces natural frequency). At the base of the cone are two rings of repelling magnets, which act as a sort of nonelectrical motor. When the cone oscillates one way, the repelling magnets pull it in the other direction, like a slight nudge to boost the mast’s movement regardless of wind speed. This kinetic energy is then converted into electricity via an alternator that multiplies the frequency of the mast’s oscillation to improve the energy-gathering efficiency.

Why bother?  First off, there are no rotating parts, and no bearings, so maintenance costs drop like a rock.  Maintenance is a major cost for conventional wind turbines.  Vortex Bladeless says its turbine would cost around half of the traditional turbine whose major costs come from the blades and support system.  They're easier to manufacture and install than conventional wind turbines.  Plus, with no spinning blades, they won't produce the infrasonic problems the current wind turbines produce and they'll be much easier on the bird and bat populations.

The company says they’re hoping to have their first product, a 9-foot, 100-watt turbine that will be used in developing countries, ready before the end of the year. A 41-foot counterpart to that turbine, called the Mini, will be ready in a year.  At this stage of their development, nothing appears to be said about how well it will scale up.  They say their approach extracts less energy from a wind stream, but they make up for it by being able to put up more of their masts than conventional turbines in a given space.

One of the major problems with wind energy is its terrible costs compared to fossil fuels.  If the cost per kW could be improved (including the long tail of logistics),it might enable wind power to make economic sense.