The time is September, specifically the weekend after Labor Day.  The year is 1976.  I had been a ham since February of '76, and had a few friends who were introducing me to lots of typical ham activities.  I lived in Ft. Lauderdale at the time, working in my first job as an electronics technician.  Some of these friends suggested a "road trip" up to Melbourne, for the annual Melbourne Hamfest as my first introduction.  It's about 150 miles between the cities, and in those days, Interstate 95 didn't go through.  It was interrupted in places and the trip took more like 3 1/2 or 4 hours than today's 2 1/2 hours.  Instead of spending the night, we were on the road early and heading back late in the afternoon.

I remember this so clearly because on the drive back, while crossing between back roads and where we could pick up I-95 again, I came the closest I have ever been to a lightning strike.  Even now, 39 years later, it is vividly clear in my mind.  Florida is the lightning capital of the US and Central Florida is the most active place in the state.  According to the National Weather Service, the number of annual thunderstorm days in the central Florida area are: 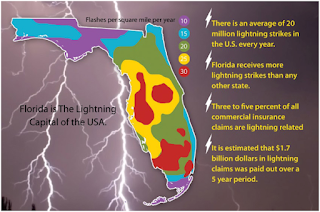 As you can see from those statistics, thunderstorms are common here, especially on summer afternoons like that.  I was in the right rear seat looking out the window at the guard rails, bolted as they are to concrete posts alongside the roadway.  It was not raining extremely hard; the lightning tends not to be in the densest rain.

Suddenly a blinding flash of light and a concrete post was hit.  It couldn't have been more than a car length ahead or so, so no more than 30 feet from where I was sitting.  The bolt looked enormous - several feet across - and painfully bright.  Then just as suddenly as it flashed on, it flashed off.  In the bolt's place in the air were what I've always thought to be little balls of glowing air.  Ionized?  Actually burning?  I have no idea.  This was definitely one of those "time freezes" moments and it felt like several seconds with the balls drifting slowly in no particular directions.   Then, BANG, the second stroke occurred, painfully bright and feet wide again.  After it flashed off, I don't recall the glowing balls of air.  During this whole event, the car was still moving, so by the time the second strike occurred, it was no more than five feet from where I was sitting.

For the last 39 years, that has been a vivid memory.  I have never been that close again, and never seen the phenomenon of the glowing balls of air again.  Until today.  A friend sent me this 10 second video taken by the dashcam in a police car.  The strike occurs around the 6 to 7 second mark and for perhaps two seconds, glowing balls of air are visible, quickly self-extinguishing.   This frame grab shows the density of the glowing air near its peak, and they're only visible against the much darker cloud.  One or two long-lasting balls can be seen on the right, near the ground level right up to the end of the video. 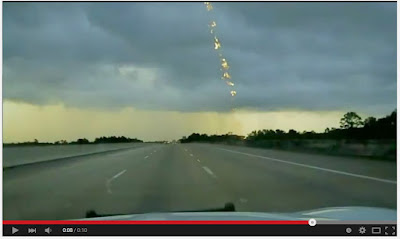 This is the closest thing to what I saw that day that I've come across in these 39 years.  It's farther away, for sure, but the contrast of how bright the lightning looks to the rest of the day looks just about right.

That day I was as close to a strike as I've ever been, and I really don't want to get any closer.  Anyone who isn't a little bit afraid of lightning doesn't understand the problem.