Hat's Off to the Garland PD Officer

Everyone has heard that the officer who ended the "Sudden Jihadi Syndrome" attack of the two idiots in Garland wasn't SWAT, decked out in top-end, tacticool gear; he was an experienced officer.  According to reports, he used his duty pistol (I'm guessing Glock 19 just based on its popularity) to take out both *s in 15 seconds.

Bob Owens has a detailed report and has updated it as details emerge from the fog.


At the point of the attack, the two suspects apparently drove up and opened fire upon an unarmed security guard who was accompanied by a 60-year-old Garland police officer. The unarmed guard was struck [in] the volley of gunfire. The veteran Garland officer then drew his duty-issue Glock pistol and opened fire on the suspects.

The officer killed one terrorist and wounded the other in his initial volley of return fire. Witnesses claim there was a brief pause, and then the officer fire two more shots to kill the still-moving terrorist as he appears to be reaching for a backpack. The entire event lasted 15 seconds, with heavily-armed Garland SWAT converging on the scene immediately afterward.

Pretty outstanding work on the officer's part.  Takes down one guy in the first few seconds from about 20 yards, then when the other guy starts reaching for a backpack, possibly to blow an IED or a suicide belt, he double taps him.  60 years old?  Anyone want to take odds he's been shooting for 50-some of those years?

Bob points out an interesting detail that isn't in that quick summary.  From the evidence photo it appears the officer attacked his attackers. 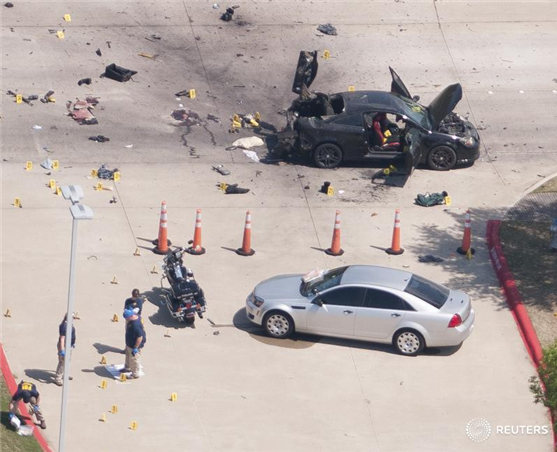 The evidence markers at the bottom of the photo above show us a remarkable story, as they denote the final locations of the shell casings ejected from the officer’s Glock duty pistol. While every pistol is different from another in its ejection pattern, and the movement of the officer and the cant of his gun precludes us from knowing exactly where he was, there is a distinct trail of shells showing that the officer was moving forward from the bottom left of the photo above towards the terrorists at the rear of the vehicle.  He appears to have opened fire from 20 yards away, and fired at least a dozen shots by the time he reached an area near the traffic cones, roughly 7-10 yards from where the terrorists died.

The post on Bearing Arms does a good job of getting more details of weapons used, and has continually swapped out better pictures as they become available.  I know the officer involved has not been identified and has asked for some time to collect himself.  That sounds like it's the first time he has had to kill someone in the line of duty.  Hat's off to you, officer, for a job well done.  I can only hope that, God forbid, I should ever be faced with that situation that I acquit myself as well as he did!