The War on Cash, and Nearly Comic Book Levels of Absurdity

Today's Telegraph (UK) news site contains an article adding fire to the war on cash: "How to End Boom and Bust: Make Cash Illegal " by Jim Leaviss, identified as being, "head of retail fixed interest at M&G Investments".

The gist of the article is that once all money is controlled by the world's governments, everything will be wonderful.  They'll have total control over all of us and all of our lives for once.  If people think they should save money, the governments can start charging us to keep it - a tax on savings called negative interest (currently in use in Sweden, Denmark, Switzerland, the European Central Bank, and Australia).  Negative interest will make us spend if the alternative is watching our money evaporate.  Likewise, if we're spending too much, they'll be able to offer interest payments to incentivize us to save money.  If they want to steal calculate they need to confiscate money out of everyone's account, a  Cyprus Haircut, it's a simple as adjusting all the accounts at once.  If despite the negative interest rates being calculated to ensure everyone spends, the velocity of money isn't high enough, they can emulate the helicopter Ben or helicopter Janet fix easily by directly creating money out of nothing for your account.  It would make the scenario Jim Rickards described here drop dead easy.

I can't even accept his basic premise that he could remove "boom and bust cycles".  The other word for this is the business cycle, which economists have been studying for a few hundred years.  I believe that to be a natural consequence of how markets work.  I can't believe they'd remove it by manipulating us.

With no need to be slowed down by people bringing actual cash to banks, they have computer control, such that they could change the value of your money as often as they want.  Conceivably day by day or even second by second - if they thought control of the economy required that.  Of course, if all business is conducted this way, the black market disappears (in theory) and tax collection is on 100% of transactions (in theory).

What could possibly go wrong?  I mean besides everything.

The article, and the others like it, is full of glittering nonsense that flies in the face of every aspect of human nature.  They completely destroy the essence of what money is.  Money is more than just a medium of exchange; it's also a store of value or purchasing power; and a standard of value.  By changing what money is "worth" from day to day, they obliterate money's role as a store of value, a store of purchasing power and a standard of value.  The only role left is the medium of exchange.  In a cashless society, all you'd ever know is you exchange some number of credits for some amount of a good or service you need.

I'd think it would become impossible to save for retirement or any major purchase if these policies were in place, but central bankers seem to hate savings.  They want everyone to buy on credit.  It's hard enough now with the interest rates going negative (in real terms) like the Fed and world central banks have in effect.  (If the interest cost on a loan is less than the rate of inflation, the interest payment is negative in real terms.  The US has had negative real interest rates since at least the 2008 crash.)

It's impossible to carry cash if it doesn't exist.  Why even carry a debit card if they can just put a tracking chip in your arm or somewhere?  In reality, you know there were would be barter based on something people value and want, be it shiny pebbles (gems) or old coins that they don't confiscate.  Doesn't 5000 years of human history demonstrate they'll fail?

Absolute control over every person on the planet, right?  The absolute end of individual freedoms?  You're reduced to nothing but an economic unit who buys or saves depending on how they choose to control you.  It sounds like the "CONSUME" signs in They Live.  Only worse. 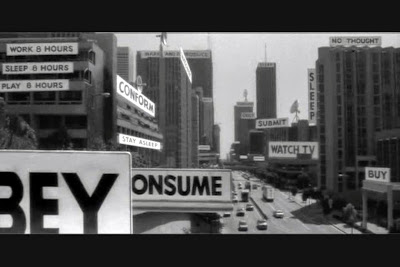 Labels: banana_states, big freakin' out of control government, commies and other idiots, economics