James Rickards is a guy with an arm's length worth of credentials in the world of economics and high finance.  He's Chief Global Strategist at the West Shore Funds, and the Editor of Strategic Intelligence, a monthly newsletter.  He's also a lawyer, an economist, and has held senior positions at Citibank, Long-Term Capital Management, and Caxton Associates.  In 1998, he was the principal negotiator of the rescue of Long Term Capital Mangement sponsored by the Federal Reserve.  He's a visiting lecturer in globalization at the Johns Hopkins University and the School of Advanced International Studies, and has delivered papers on risk at Singularity University, the Applied Physics Laboratory, and the Los Alamos National Laboratory. He's an advisor on capital markets to the U.S. intelligence community and the Office of the Secretary of Defense.  He was involved in the first war gaming exercises held at the Pentagon that centered on financial attacks.  I could go on, but you can read his bio on his web page.  In summary, he has built a career on the inside, at the highest levels of the game.

Rickards is the author of a few books that my readers might be interested in.  His first book (2011) was called "Currency Wars" (if you haven't noticed, we're in one now); the Financial Times reviewed it saying  "let’s hope he’s wrong". His response was, "I hope I’m wrong, too".  His most current book,  "The Death of Money" is currently on my Kindle, although I've just barely cracked the cover.

Rickards recently did a short, 20 minute-ish interview with Glenn Beck on the radio program.  A video and the transcript is available.  The interview was centered on what economic collapse looks like and what the world looks like after it happens.  I think what got Beck interested in interviewing him was an article he published on the Daily Reckoning:  "In the Year 2024".   The combination of that piece and the interview rate pretty high up on the pucker scale.

Rickards has some interesting things to say about where the various central banks are, since they've been creating money at a breakneck pace since 2008.  The central banks are insolvent.  Behind closed doors with one of their own, like Rickards, they'll admit they're insolvent and then claim it doesn't matter.  According to one standard definition ("a prolonged period of below-trend growth, which neither collapses nor gets back to trend"), we're in a depression now and have been for some time.


JAMES: ... People say - I say we’re in a depression. People go, you’re nuts. GDP is not going down. We’ve been recovering for six years. Where are the soup lines? Well, the soup lines are Whole Foods. Because now you get food stamps on a digital card. By the way, I’m not disparaging people. You can go into Whole Foods and get your soups. So we have the soup lines. They’re just at Whole Foods. We all know the only reason why unemployment is not higher is because labor participations collapsed.

The point is, this 2 percent growth that we’re chugging along. In some quarters, a little more. In some quarters, a little bit less. If we’re capable of three and a half, which we are, and in the short-run, maybe 5 percent, which we saw between ’83 and ’86, if we’re capable of that and you’re actually growing at two, it’s the gap between the three and two. Or the five and the two that’s depressed growth. That’s the definition of a depression. The problem is, we are Japan. We’ll be in this for 20 years, unless we make structural changes. A depression is structural. It’s not cyclical. You can’t solve a [structural] problem with a cyclical solution, which is money. Money printing, if you know, inflation is a little high and you want to dial down the money supply. Or unemployment is high, dial it up. That’s a cyclical solution. We need structural solutions. We’re not getting them.

He'll be among the first to tell you that financial collapse could happen this week or in a decade.  It's impossible to tell.  In many ways, it's like an avalanche: it's impossible to blame the avalanche on any particular snowflake, but any one of the continuing snowflakes could cause it.  What's it look like?  The only "bank" with any solvency left is the International Monetary Fund.  The IMF has Special Drawing Rights, SDRs, that would allow it to prop up the world when the collapse happens.  His most likely scenario would be that all banks around the world, all banks, would be shuttered.  After some time, perhaps a few days, perhaps a week, everyone would be able to withdraw 250 or $300 a day for food and energy expenses.


GLENN: And all of a sudden we’re just out. This could happen in a three-day, four-day, five-day period where all of a sudden the world has changed. The banks are closed. You don’t have access to money. $300 out of the ATM. That’s all you can get.

JAMES: Right. Gas and grocery money. That’s about it.

GLENN: That can go on for?

JAMES: Weeks, months. Hey, if you have your gas and groceries, what else would you need? That would be the point. They wouldn’t steal your money. You just couldn’t get it. It’s not just stocks. It’s money market funds. You wouldn’t be able to redeem those. Close the stock exchange. Say, hey, we’re not stealing your equity. But we’ve converted it to private equity.

GLENN: You said they wouldn’t steal things. Well, they did in Cypress.

GLENN: The state comes in and says, everybody gets a 50 percent haircut. So whatever you have, you lose 50 percent of it. To me, that’s theft. This is all going on. The state starts to crock down. Everybody is kind of pinned into their own place. What does it — what does it look like afterwards?

JAMES: Well, now there are a couple of states to the world. So maybe everybody will just acquiesce. That’s actually a lot of history. When things get bad, people just say, hey, don’t bother me. I’ll go alone with this. But you could see the outbreak of money riots. You could see people in the streets, protesting not social conditions, but financial conditions. Of course, we have a heavy militarized police ready to respond to that with tear gas and flash bang grenades and they’re armored up with all this money from the federal government. So they’re ready.


The Daily Reckoning piece, In the Year 2024, is an interesting read, too. Yes, dystopian; yes, shocking, but reasonable.  It describes a future in which the collapse just described has happened.  The financial structure of the world has come down to three currencies: the dollar in the Americas; the Euro in Europe, Africa and Australia, and the "Ruasia", a new currency that combines the old Russian ruble, Chinese yuan and Japanese yen in a currency for Asia.  All the gold in the world has been confiscated and buried in a secure vault so that nobody ever tries to use it as money again, and no country can create a gold-based economy.  All G-20 nations contributed their national gold to the vault. All private gold was forcibly confiscated and added to the Swiss vault as well. All gold mining had been nationalized and suspended for "environmental reasons".  Land and personal property were not confiscated, because much of it was needed for living arrangements and agriculture. Personal property was too difficult to confiscate and of little use to the state. Fine art was lumped in with cheap art and mundane personal property and ignored. 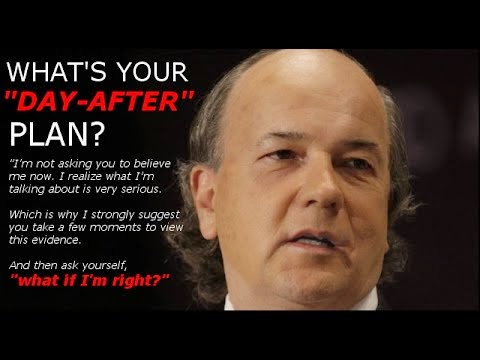 I should point out that James Rickards is not really an advocate of gold-based currencies and not really a "gold bug" in the sense that he thinks we should have so much we're tripping over it; he just thinks it's prudent for people to have around 10% of their savings in hard assets like precious metals.   He outlines a scenario for why in the "In the Year 2024" piece.