Earlier this week, the White House released preliminary budget goals for 2020 (150 page .pdf - NASA starts on page 102).  While some reports claimed that the Space Launch System (SLS) - NASA's heavy lift vehicle - would have its funding cut out, Ars Technica is reporting a 17% reduction in budget.  Cutting 17% is clearly not zeroing out the program, but it is putting intense pressure on NASA and the contractors working on the program.

The White House plan specifically talks about using a commercial launch vehicle for a planned mission to Jupiter's moon Europa, a mission previously slated for the SLS.  The budget chips away at the SLS in three important ways.


First of all, with the budget cut, the president's proposal "defers" funding for the Exploration Upper Stage. That's the more powerful second stage that would allow a future version of the SLS rocket to lift both the Orion capsule and large chunks of payload to lunar orbit.
...
The budget also opens the door to commercial launches of cargo to lunar orbit, including comments of its proposed Gateway station there. "Lunar Gateway elements would be launched on competitively procured vehicles, complementing crew transport flights on the SLS and Orion," the document states.
...
Finally, the budget says that a robotic probe to Europa, due to launch in the 2020s, will not launch on the SLS booster. Instead, it will launch on a private rocket. (As Ars previously reported, this almost certainly would be SpaceX's Falcon Heavy). "By launching that mission on a commercial launch vehicle, NASA would save over $700 million, allowing multiple new activities to be funded across the Agency," the budget document states.

The second one might be the biggest change.  Until now, plans have called for "co-manifesting" the Orion spacecraft alongside modules of the Gateway onto a single SLS rocket, with its Exploration Upper Stage.  Without the enhanced upper stage, the Block 1 version of the SLS isn't powerful enough for such co-manifested missions (see illustration below).

Essentially these downgrades leave just one real task for SLS, which no commercial rocket can presently perform: the direct delivery of a crewed Orion capsule to a high lunar orbit.

An address by NASA administrator Jim Bradenstine at the Kennedy Space Center last Monday unveiled the budget.  He used a word we haven't heard from the space agency in a while:


[He] spoke about "reusability" as an essential cornerstone to the space agency's return to the Moon. By going with reusable systems, Bridenstine said NASA's plans for human missions to the Moon and eventually Mars would be affordable and sustainable.

The agency's large rocket—which has cost NASA $12 billion so far to develop, and has an annual budget of around $2 billion—is an exception to this. "SLS is not reusable, but it is a critical piece of the architecture that enables us to deliver reusability to the Moon," Bridenstine said.

I suppose it's important to point out that this is staking out a starting point, the place where negotiation starts.  In any program as big as SLS, there are jobs distributed around the country, allowing lots of senators and representatives to "bring home the bacon" for their districts or states if they get funding.   Add in the complication that the House is under Democratic control, which could mean none of this gets passed and the SLS program grinds to a halt.  I distinctly recall looking for mention of space flight in the Green Amish New Deal and finding nothing mentioned.

In years past, the Senate Appropriations Committee, under the direction of its chairman Richard Shelby (R - Alabama), has increased the administration budget proposals for the SLS.  Senator Shelby's state is home to Marshall Space Flight Center in Huntsville.  Marshall is the NASA center managing the SLS program.

There's no guarantee that any of this stands, but it is interesting.  In my mind, the critical thing (besides the politics) is really how well the SLS contractors continue to perform.  So far, the SLS has been consistently over budget with its schedule slipping to later dates.  Not to single the SLS out as particularly bad, many (I'd say most) Fed.gov programs are over budget and late.  I just think that if the program keeps slipping, the SLS may never fly. 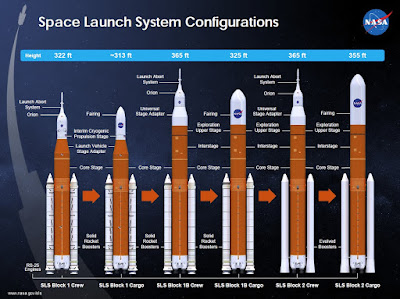