Last Summer, I reported about how competition from SpaceX was hammering virtually everyone in the launch business, especially the Europeans and the Russians.  In the space of five years, from the first appearances of SpaceX as percentage of worldwide launches in 2013, the launch business went from being essentially Russia and Europeans to being SpaceX and the Dwarfs.  SpaceX had the majority of launches (2/3), the ESA and Russia split the remaining third with the Russians having less than 10%. 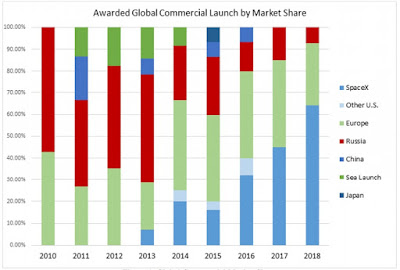 The ESA, working on the next generation of their successful Ariane series, Ariane 6, had said they didn't care about reusing boosters to minimize costs, saying the market is too small.

Seems they had a change of heart.

Last month, Ariane Group and the French space agency CNES announced the creation of an "acceleration platform", called ArianeWorks, to speed development of future launch vehicles.  It sounds like a Skunk Works in concept.  In the announcement:


... the organizations released a promotional video for the group's first step—a so-called Themis demonstrator. The goal of this project is to build a multiple-engine first-stage rocket that launches vertically and lands near the launch site. The rocket will be powered by Europe's Prometheus engine, a reusable liquid oxygen and methane engine that may cost as little as $1 million to build.

The new video is striking because of how similar the Themis demonstrator of "breakthrough technologies" looks to SpaceX's Falcon 9 rocket. Even the engines, with a thrust of 100 tons each, are similar to the output of the Merlin 1D that powers the Falcon 9 rocket. (One difference is that the Merlin 1D engine uses kerosene fuel instead of methane).

The promotional video shows a rocket taking off and then jumps to a landing, complete with four landing legs. A new rocket then takes off as another one lands—similar to concepts SpaceX has discussed for its next generation-rocket and Starship. 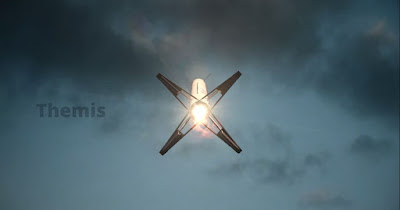 Why, yes, it sure does look like the Falcon 9's landing structure.

To be fair, the Europeans aren't shy about saying they're copying SpaceX.  Everybody's doing it.


During a presentation last year, the head of the French space agency's launch vehicle program, Jean Marc-Astorg, was asked about the similarities. As part of its development program, Ariane and CNES are also planning a "Callisto" hopper vehicle that is similar the Grasshopper test vehicle SpaceX flew in 2012 and 2013 to demonstrate vertical landing capabilities.

"Callisto is Grasshopper," Astorg said at the time. "The Chinese are also building a similar prototype, I have no problem saying we didn’t invent anything."

To be honest, I think this is how the high-tech world has been working for the last, I don't know, forever.  I'm betting everyone at SpaceX has been expecting this.  The first company to develop a new technology gets to be first in the market and in smaller things, like computer accessories or personal electronics, they make more money by being first on the market than by patenting everything and suing everyone who infringes the patent.  Six months or a year later, someone else figures out how to do it and drops one on the market at a lower price point.  The first company is now the big name in the field, so they cut prices to just about match the upstart and continue to reap more sales.  When the next companies come out with another clone, the process repeats.  At some point, someone develops the Next Big Thing and the pattern starts over.

This is an interesting time for space flight.  The Themis booster and Prometheus engine that Ariane is talking about here aren't likely to be flying until 2028 or 2030.  By that time, the Chicoms should have their equivalent going, and SpaceX will be flying their next generation, bigger Starship.  Don't count out Blue Origin, our new neighbors up the road.  They should have considerable experience with their reusable New Glenn rocket.

Speaking of which, I haven't talked about the current big mission SpaceX is flying as I type - because I didn't want to jinx them.  Early last Saturday morning, we got up at 2:40 for the 2:49 scheduled launch of the first test of the Crew Dragon spacecraft that is slated to carry astronauts to the ISS.  This was an unmanned test flight, and they had a list of milestones that were to be achieved including autonomously docking the Dragon with the ISS, then undocking, and return to earth - it's supposed to land offshore Friday morning, under parachute like the old Mercury/Gemini/Apollo capsules.

The sky conditions were perfect and it was the first time we've been able to see the returning first stage rocket burns.  The booster landing drone is well offshore, over a hundred miles, so the landings are below the horizon and we can't see the first stage burns during the day.  As it is, the deceleration rocket burn was close to the horizon, no more than 10 degrees above it, and barely above the houses when the engine turned off.