On The Other Hand, A Stopped Watch is Right Twice A Day

I've mentioned on occasion that I get a daily newsletter from the Foundation for Economic Education (FEE) and several stories that I've posted over the last few months have come from their articles, even if they just made me dig a little deeper.  The format is generally four or five stories with a teaser and link to the website to read it.

Imagine my surprise when I found they had a quote from legendary liberal economist Paul Krugman and he was right!  More at the story itself, "5 Reasons Raising the Minimum Wage is Bad Policy".


As Paul Krugman explained, "So what are the effects of increasing minimum wages? Any Econ 101 student can tell you the answer: The higher wage reduces the quantity of labor demanded, and hence leads to unemployment."

At first, I wasn't sure if I could handle the brutal unfamiliarity of being in a universe where Krugman is occasionally right.  For years I've reflexively known that if he suggested we do something the safest bet is to do the opposite.  But here it was, in black and white, including a link to back it up.

Then I thought of the adage I heard growing up, "even a blind pig finds a few acorns".  Then the redneck version of statistical significance, "if it happens less than 5% of the time, it's probably a random event."  In a little while, I found it more comfortable and acknowledged that even as reliable a channel marker as Paul Krugman can occasionally drift off its known position.  It's the same universe, we just have to use more means to navigate.

You might wonder why someone like Krugman has the audience he does, or why the Austrian economics never gets equal billing.  Even the ludicrous ideas of Modern Monetary Theory get more positive buzz than the much more sound Austrian school.  It's really simple.  The Federal Reserve uses their monetary powers to swamp out competition.  They buy up all the alternatives.

Early in the month, I mentioned I was reading The Skyscraper Curse, by Dr. Mark Thornton.  I've finished the book, which I hadn't when I posted that article, and Dr. Thornton does a pretty effective takedown of the Federal Reserve in the final chapter.   Take this quote (from pp. 233-234), referring to a study by economist Lawrence White:

How big is that staff?  White noted that the Fed’s staff of economists in 2002 was 27 percent larger than the number of macroeconomists and experts in money and banking employed by the top fifty PhD-granting economics departments in the United States combined.  Why, it's almost a guarantee that if you get a PhD in economics specializing in monetary theory, banking or macroeconomics, you either work for the Fed or you don't work.

It gets worse from there.  The Fed dominates the editorial review boards of any journal in those fields, at rates of 80 to almost 90% of the editorial boards being affiliated with the Fed. Think that might block contradictory information from being presented?  It still doesn't stop there: the Fed has its own economic journals; nothing gets published there without passing review by the Board of Governors of the Fed.  Taken together we find institutionalized group think of Keynesian economics and an iron gate that prevents any ideas contrary to the Fed's preferences from being published.

Is there any wonder we never hear about sound money based on a commodity standard; gold, silver - heck, even the stone rings of Yap island, something that can't just be created by declaring it money? 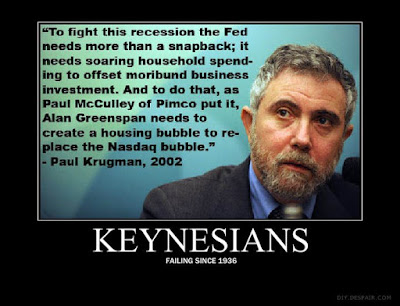 (Krugman also famously said during the Obama years that an alien invasion could stimulate the kind of massive spending he envisioned.)