Since I started writing about my barbecue adventures with sous vide cooking, Barbecue 401, in December,  I've been doing most of my experiments with the smoker rather than finishing in a hot pan.  In addition to brisket, I've made beef short ribs a couple of times and today was the second chuck roast I've done.

For my first chuck roast I followed a recipe that called for 133 for 24 hours, this time I cooked it at 155 for 48 hours.  How temperature and time work in sous vide cooking is that temperature sets the appearance "doneness", while time affects the tenderness.  In other words, the rules of thumb we've grown up with about rare vs. well done kind of go out the window.  Cooked at 133 for 24 hours, it was supposed to have the texture of a medium rare steak, but the long cooking should make it more tender.  It looked like a medium rare pink (bordering on just medium), but it was more tender than any medium sirloin I've had.  You can see the texture looks very steak-like. 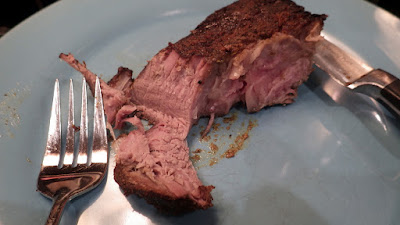 Today's roast, cooked at 155 for 48 hours, is another thing entirely.  By temperature, 155 is well done which we think of as tough, but by time, the long hours at the temperature act to break down the tissues that make a well done cut of beef tough.  It figures to come out much more like a pulled beef consistency and it did.  For scale the thickness of the roast is around an inch and a half.  That's a salad fork (in both pictures).  What you can't see is that it's juicy, (the surface literally dried out in the 30 seconds it took for me to go get my camera), as well as tender and delicious. I should take videos of this to show just how easy it is to separate the groups of muscle fibers (the technical term is fascicles). The lightest twist of the fork pulls them apart, like good pulled pork only made of beef.

The other meal I've done a couple of times with different settings is beef short ribs.  Again, the first time was using an online recipe and that called for 172 F for 14 hours.  These were successful and good, but one of the gurus on a forum suggested 133 for 72 hours, based on an article at Chef Steps. To clarify a little, my cooker is made by Anova and the website they publish recipes on is Serious Eats (plus their own), while the other major brand, Joule, publishes on Chef Steps.  When I asked him to describe what cooking at 133 for 72 hours got me; what they're like, he said, "Like nothing else. Medium rare, steaks, but braise tender. There’s no way but Sous Vide to get them there."  I was off to do the test. 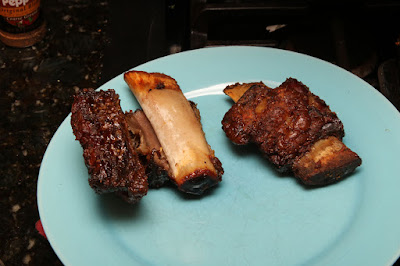 The scale here isn't easy to figure out.  That's a full sized dinner plate and the chunk that's on the left is bigger than my hand.  Rough guess about 2" thick by 6" long.  This guy was right.  The texture is like nothing else.

I've been doing the smoking at higher chamber temperatures after reading that should help the bark formation.  It seems to have done that.

I know there are people who say, "it's not real barbecue", but I'm not doing competitions and I don't care.  It has pushed me to considering making some improvements to my smoking and barbecuing setup.  I've needed a grill since my last one rusted out, and I'd like to hit higher temperatures in the smoker.  Doing some reading and research, thinking about the options available: something like a pellet grill or Weber Kettle?   Get an Adrenaline kit for a Weber?  Or just an Amazen for my electric smoker, to get more smoke?

Like all good hobbies, you can learn this quickly and spend the rest of your life studying how to get better at it.  I do have to eat all the rejects, but so far that hasn't been a bad thing.