Donald Sensing over at Sense of Events has great little article about the physical impossibility of the Green New Deal.   It's called "The Green New Deal - a unicorn and butterflies dream factory", and opens with a question that I haven't seen on the news.


But if renewables are going to put fossil-fuel companies out of business, then why have oil and gas investors,

The answer is simple: for a few reasons (some of which I bet you know), it's not possible with any known technology that current renewable energy sources can provide the world's energy needs.  Everyone in the energy industry or following the subject knows it.  The folks working in renewables know it and the people in the oil and gas industries know it.  The oil and gas companies spend money on "advertisements promoting solar" to try and get some of the that sweet gubmint money that will flow to the solar and wind energy companies.  The solar companies will need power generation for when the sun doesn't shine; not just night but during cloudy weather (I understand many of you call that "winter").  There either needs to be massive energy storage or fast-reacting energy production systems.  Massive energy storage technologies don't exist and those fast-reacting production systems tend to be oil or gas based.

Better yet, Don links to "Why Renewables Can't Save the Planet", by Michael Shellenberger, an author with genuine cred to the greenies.  He's a Time Magazine “Hero of the Environment,” and president of Environmental Progress, an independent research and policy organization.  In many ways, this reads like a personal story of how he came to his conclusions, more than just a recital of those conclusions.  I really think it's worth your time to read.  As usual, I'll excerpt some parts here to whet your appetite.


In 2002, shortly after I turned 30, I decided I wanted to dedicate myself to addressing climate change. ...

I thought the solutions were pretty straightforward: solar panels on every roof, electric cars in every driveway, etc. The main obstacles, I believed, were political. And so I helped organize a coalition of America’s largest labor unions and environmental groups.
...
The first [trouble they ran into] was around land use. Electricity from solar roofs costs about twice as much as electricity from solar farms, but solar and wind farms require huge amounts of land. That, along with the fact that solar and wind farms require long new transmissions lines, and are opposed by local communities and conservationists trying to preserve wildlife, particularly birds.

Another challenge was the intermittent nature of solar and wind energies. When the sun stops shining and the wind stops blowing, you have to quickly be able to ramp up another source of energy.

Shellenberger has met reality and been slapped around by that stone-cold bitch.  Wind farms kill birds; not the small, plentiful birds like the billions of sparrows, jays and other common birds that house cats kill around the world; wind farms kill large, rare and endangered birds like hawks, eagles, owls, and condors.  Wind or solar farms require large, high-voltage transmission lines and towers that cross from the remote sites to power substations.  One of my wife's favorite stories is when she found that a group of environmental protesters were shocked to find their wonderful wind turbines needed transmission lines - power lines - to connect to the grid; they had simply never thought how the electricity got from the turbines to the users.  It just magically appeared at their outlets.

The reason for the large solar and wind farms is that both forms are energy are dilute in area (which is good, or they'd kill us).  Solar energy is only available at a concentration of roughly 1100 Watts per square yard, and with photovoltaic efficiency considerations you can figure 300 Watts per square yard - maybe less.  You can see how a solar farm big enough to produce megawatts would take enormous amounts of space.  Shellenberger puts it this way:


You can make solar panels cheaper and wind turbines bigger, but you can’t make the sun shine more regularly or the wind blow more reliably. I came to understand the environmental implications of the physics of energy. In order to produce significant amounts of electricity from weak energy flows, you just have to spread them over enormous areas. In other words, the trouble with renewables isn’t fundamentally technical—it’s natural.

In a move that might get Shellenberger declared a non-person by his green colleagues, he comes to the conclusion that the only reasonable answer is nuclear power.  He points out that contrary to most peoples' expectations, wind turbines kill many more people than nuclear power.

His final words in the article:


I think it’s natural that those of us who became active on climate change gravitated toward renewables. They seemed like a way to harmonize human society with the natural world. Collectively, we have been suffering from an appeal-to-nature fallacy no different from the one that leads us to buy products at the supermarket labeled “all natural.” But it’s high time that those of us who appointed ourselves Earth’s guardians should take a second look at the science, and start questioning the impacts of our actions.

Now that we know that renewables can’t save the planet, are we really going to stand by and let them destroy it?

I would let those be the final words to this article, but I like the words of Patrick Moore, former president of Greenpeace, to everyone's favorite green twit. 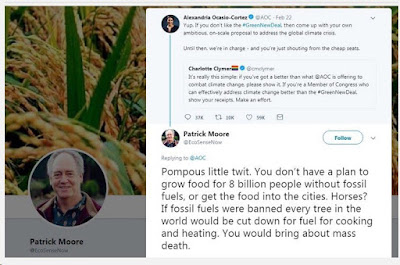 Yes I realize that to some greenies killing off billions of people is a feature, not a bug.  I've only been writing about it since 2011.  It's just that they're not all totally FN and not willing to learn new things.  This guy doesn't sound like he thinks the anti-civilization people are the model to follow.

Horses to bring food to the people?  People cutting down every available tree to heat their homes and cook their food?  Maybe Ms. Occasional Cortex could use to read my 2011 piece "When Gasoline Saved the World From Pollution".