About That Captcha Thing

Two days ago, some of us had some discussions about Blogger's use of Captcha.  Some said the ones showing up on my site were harder than elsewhere.

I'm using straight up Blogger from Google.  No add-ons.  Nothing fancy.  I thought the only effect I could have on Captcha was either to turn it on or turn it off.  After swapping a couple of chats with experts on their forums, I've found I can't even turn it off.  It's effectively hard wired on. 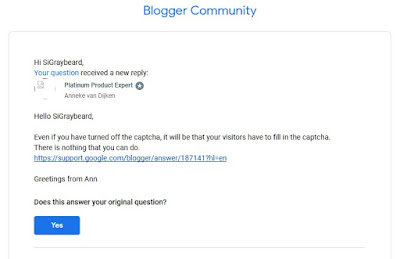 According to the webpages they referred me to there's no way for me to affect anything.  I was briefly hopeful I could return to the type 1 Captcha puzzles because those always seemed easy, while with the pictures, I find I mess up often without knowing why.

(what they call reCAPTCHA V1)

Unfortunately, I don't see that it's even possible to revert to V1.  Their website is stressing a V3 that is supposed to be easier on humans but better at blocking bots.  Users won't do anything - they'll just use the site and V3 will block the spots.

Does Captcha do anything worthwhile?  Couldn't prove it by me.  I got half a dozen Spam comments today that were all to very old pieces (one was from 2010) and they clearly not were not written by English speakers.  I have no idea what Captcha does besides annoy people because those comments were only stopped by my setting to moderate comments on posts more than 14 days old.

The Google community folks didn't recognize a way in which my Captcha tests could be harder than any other sites' tests.

Although I tried to turn it off, I can't even do that.  I'm stuck.