None of them big enough to justify a story.

NASA had been talking about having the first "all woman space walk", then cancelled it this Monday.  It turns out they both wouldn't appear in public wearing the same outfit.

No, that's a bad joke that I just made up, although it made my wife LOL.  They cancelled the walk for an equally insipid reason: they both wear the same size space suit and no one thought to have two onboard the ISS.


One of the two women on the mission, Anne McClain, will now have to give up her place to a male colleague.

She thought a large-sized suit would be fine but after a spacewalk last week found that the medium-sized was a better fit and would be the most appropriate suit to wear to venture back outside the International Space Station.

It's the essence of identity politics to do stunts like this and whoever is pushing the stories needs to find a real job.  To roughly quote my wife, who was the first female electronics technician in most of the places she worked, 'what is this, 1970?  Why do we need to keep an "oppressed identity scorecard" for every mission?  I thought we were done with this when we were kids.'


Over the last couple of years, I've covered the enormous financial pressures on the space launch business that SpaceX is causing.  In 2013, the launch business was Russia capturing about half of the launches, the European Space Agency at 22%, then Sea Launch at 15%, Spacex had about 7% and Japan at just under that.  By 2018, SpaceX had captured close to 65%, the ESA was up a bit to around 25% (having peaked around 40% by 2014-2016) and Russia was down to 7%.

This week we learn that Russia's Roscosmos is cutting the cost of their Proton launch vehicle's flights to match SpaceX's price.


Russia’s State Space Corporation Roscosmos will cut the cost of launching a Proton-M carrier rocket to the level of a US Falcon 9 (produced by SpaceX) through lower expenses on ground-based preparations, Roscosmos Chief Dmitry Rogozin said on Monday.

You've got to consider this interesting, but with the recent failures of the Proton (example) it's not clear whether international customers will be so motivated by price that they'll overlook the reliability concerns.  They could also cut costs by leaving parts off, Muntzing the vehicle, but I don't think many customers would sign on for that.  The space business selects for people that are very cautious.

Speaking of SpaceX, the second Falcon Heavy launch is approaching, which will be something I'd watch, regardless of time of day.


The reported plan is to launch Falcon Heavy as early as April 7 at 6:36 p.m. Eastern from the Launch Pad 39-A at the Kennedy Space Center in Cape Canaveral, Florida, reported CNBC on March 15. The mission is dubbed Arabsat 6A and would launch a communications satellite built by Lockheed Martin into orbit for Saudi Arabian company Arabsat.

The iconic image of the two first stage boosters returning to the landing facility on the KSC and landing within about a second of each other has stuck with me.  The fact that the core booster crashed into the booster recovery ship and was lost is an incentive to SpaceX to get it right this time. 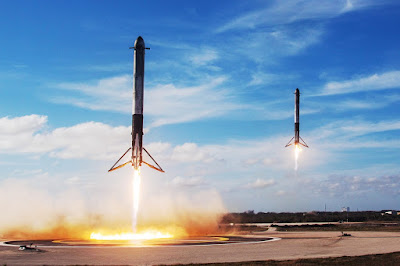