A couple of short observations, none of which is enough to gather a longer post

The SpaceX Crew Dragon capsule successfully undocked from the International Space Station in the early morning (2:32 AM East Coast time), fired its reentry burn and splashed down off NE Florida at 8:45AM, bringing the Demo-1 test flight to a successful conclusion. 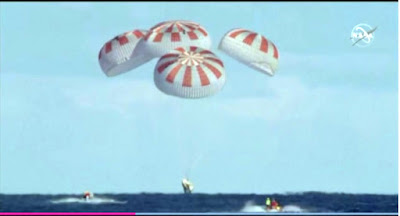 There are undoubtedly reams of data being gone over, but this was a test flight testing many systems.  We don't get to look at the books and see how they get graded, but it appears to be a successful test flight.  Were 90% of the major goals achieved?  100%?  80%?  We don't get to know for now.  The Crew Dragon docked autonomously at the ISS Sunday morning (March 3) and then stayed docked for five days while tests and measurements were made - videos from last Sunday show astronauts from the ISS checking the atmosphere of the Crew Dragon for contamination while wearing protective hoods and respirators.  The capsule undocked at 2:32 a.m. this morning, survived the fiery descent through Earth's atmosphere, deployed its parachutes and splashed down gently into the Atlantic's rolling waves, about 230 miles (370 kilometers) off the Florida coast.

From here, it seems this puts us one step closer to Americans lifting off from American soil to the ISS.  I think they also set a performance bar for Boeing's tests flights; their equivalent of this mission could come in April.

Speaking of the docking, the best video I've seen is in this one from SciNews.  They put the video onto a soundtrack of Strauss' Blue Danube Waltz, and the overall reminiscence of Kubrick's 2001 struck me so deeply, I found myself tearing up, something I've never done before.


Over the years of this blog, I've had two nicknames for Michael Bloomberg.  Either "the most dependable asshole in American politics" or "that nasty, fascist prick".   Bloomy has been in sole possession of those titles since I opened shop in 2010.

Today, we find there is intense competition.  Maybe not for both, but there is a spirited competition to wrest the title of "Most Dependable Asshole".  It's a three way between representatives Ilhan Omar, (D - Minnesotastan) for her virulent antisemitism, Rashida Tlaib (D- Detroitistan) for her, "I'm gonna impeach that motherf***er", and everybody's favorite nitwit, AOC (D - NYFC - Do you have a problem?) for, well, basically every sentence that leaves her mouth.  They all wear that "I'm a victim of everything!" intersectionality cloak, they're all under investigation for campaign finance violations, they're all insufferably full of themselves.  Which is a long-winded way of saying, they're all assholes.

Trying to out-asshole Bloomberg is tough challenge.  If nothing else, he gets extra points by funding all the gun grabbing, outlawing 32 oz drinks, warning about salt consumption while personally putting salt on everything, and creating laws to ensure people never get enough pain medication and suffer as much as he can make them.


Florida had an extremely rare event, a minor earthquake the night before last (Wednesday night/Thursday morning).  The quake registered 2.6 on the Richter scale, which I understand is barely enough to feel.  The epicenter was near the city of Century in extreme northwest Florida.  Century is virtually on the Florida/Alabama state line, due north of Pensacola.  Bing Maps tells me it's 515 miles from here, and at least an 8 hour drive (+ some).  That's just a few miles closer than as far as one can drive and still be in Florida.  You'll change time zone to central time during the drive across the panhandle.

The biggest quake in Florida over the last few years was a 3.7 in Daytona Beach; which is much closer (about 90 minutes from me).  That one was " triggered by U.S. Navy testing that involved a man-made explosion" so hardly qualifies.  There was one in the Gulf of Mexico back in 2006 that was pretty strong, 5.9, but well offshore.