Readers Here Got This Story Eight Years Ago

At least they got an indication it was coming.

Various news sources are all linking to a story in the New York Times on a growing trend of cities cutting back on recycling as the costs to recycle grow.  Warning: this is the NY Times, so expect a left wing bias.


Philadelphia is now burning about half of its 1.5 million residents’ recycling material in an incinerator that converts waste to energy. In Memphis, the international airport still has recycling bins around the terminals, but every collected can, bottle and newspaper is sent to a landfill. And last month, officials in the central Florida city of Deltona faced the reality that, despite their best efforts to recycle, their curbside program was not working and suspended it.

It's easy to spot signs of the problems in those three cities that I talked about here in February of 2011.  The problem is that there isn't a market big enough for the materials being recycled so that the supply vastly exceeds demand and the prices for recycled materials have collapsed.  How bad is it?


Reports are that Germany has millions of tons of recyclable plastics piled up in fields because nobody wants the stuff. And it is literally more expensive to collect some recyclables than to just pitch them. San Francisco’s Dept. of Waste figures it pays $4,000/ton to recycle plastic bags for which it receives $32/ton.  (emphasis added)

Obviously, nobody in their right mind is going to pay $4,000/ton to collect and process something to recycle and get $32/ton for it.  Nobody would think of doing that except government.  The only question is why has it taken eight years to get to this point?  One word: China.  To get back to the original link at the NYT:


Prompting this nationwide reckoning is China, which until January 2018 had been a big buyer of recyclable material collected in the United States. That stopped when Chinese officials determined that too much trash was mixed in with recyclable materials like cardboard and certain plastics. After that, Thailand and India started to accept more imported scrap, but even they are imposing new restrictions.

The turmoil in the global scrap markets began affecting American communities last year, and the problems have only deepened.

For seven of those eight years, China imported our recycled waste streams to process.  Until last January when China announced that it would no longer import “foreign garbage.”  That put American communities in a bind and they turned to the companies that were already contracted to handle waste disposal, like Waste Management and Republic Services.  Prices to recycle things started going up.  Suddenly some of the items dutifully separated into recycling bins started getting pushed into the regular trash stream to landfills or incineration.

Eight years ago, I summed it up this way:


The fact that there's a market for some products to recycle doesn't negate the fact that you can't create a market for something by wishing it into existence.  If there's a use for X tons of waste newspaper on the market that's provided by a handful of companies (and 10 year old boys), when the supply suddenly goes to 10 X or 100 X, the price is going to fall proportionally, and you're still going to end up with tons of newspaper you have no market for.  How much would you pay for something you had absolutely no use for?

The answer to that final rhetorical question is not only that you wouldn't pay for it, you'd charge the owner to take it off their hands.  That's exactly what's happening here.


While there remains a viable market in the United States for scrap like soda bottles and cardboard, it is not large enough to soak up all of the plastics and paper that Americans try to recycle. The recycling companies say they cannot depend on selling used plastic and paper at prices that cover their processing costs, so they are asking municipalities to pay significantly more for their recycling services. Some companies are also charging customers additional “contamination” fees for recycled material that is mixed in with trash.

Contamination is a major problem for recycling facilities.  Contamination can be leftover food in a plastic or glass bottle, olive oil residue in its bottle, or it could be things that can't be recycled mixed in with things that can, like styrofoam peanuts or plastic grocery bags mixed in with other plastics.   Don't even think of motor oil residue in a plastic bottle.

Florida is having the same sorts of problems and has launched a statewide campaign to help stem the red ink flowing in recycling budgets.  They've changed the buzz phrase from its initial, “reduce, reuse, recycle” to “Reset. Rethink. Recycle.”


“Reset. Rethink. Recycle” is a statewide public education campaign dedicated to increasing Florida’s recycling rate to 75 percent by 2020 and decreasing curbside contamination by helping Floridians rethink what they recycle and reset their behavior to focus on the basics.

What are the basics?

Clearly, this is a major step back from the 20 year old “reduce, reuse, recycle” mantra in which everything was recycled and moving more toward trying to sell the things in the trash stream that have long been sellable.  By getting the people who pay for the recycling through their taxes to do some of the labor that recycling companies do, perhaps they can get the cost of recycling down and not lose as much money as they currently do. 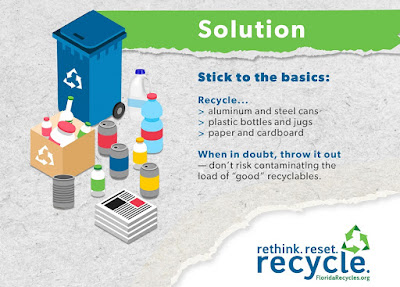 I'd like to think that saner heads might have concluded that they really can't create a market for these used materials by declaring one.  Instead, what I see is that the iron hammer of regulation is going to get flying again.  We have a problem with plastic bags in the recycling stream?  Let's just outlaw them so they can't show up anywhere.  Same thing with those demon plastic straws.  We're getting food containers with oil residue?  We'll track the locations and fine the house that put the dirty container in their reycling.