Christchurch, New Zealand -- New Zealand Prime Minister Jacinda Ardern announced an immediate ban Thursday on sales of "military-style" semi-automatic firearms and high-capacity magazines in the wake of a terrorist attack on two mosques in Christchurch that killed 50 worshippers. Ardern said the sales ban was effective immediately to prevent stockpiling and would be followed by a complete ban on the weapons after new laws were rushed through.
...
The ban includes any semi-automatic guns or shotguns that are capable of being used with a detachable magazine that holds more than five rounds. It also extends to accessories used to convert guns into what the government called "military-style" weapons.

Gee, they're not taking the 10/22s - as long as you don't use those evil 15 or 25 round magazines.  In his manifesto, the Mosque shooter said he wanted to get gun bans instituted to divide the country.  The tricky detail is that he thought the key was to break the US down into civil war, and although their ban only affects New Zealand, they clearly got his message and enacted his goals.  Miguel at Gun Free Zone talked about this the other day (March 19).


Remember what the New Zealand shooter said in his manifesto (I apologize for not finding the whole text, the media is doing a good job censoring the internet).


He says he also wanted “to create conflict between the two ideologies within the United States on the ownership of firearms in order to further the social, cultural, political and racial divide within the United states.

“This conflict over the 2nd amendment and the attempted removal of firearms rights will ultimately result in a civil war that will eventually balkanize the US along political, cultural and, most importantly, racial lines.”

Consider this: New Zealand has a population of under 5 Million people - close to 4,800,000. Florida alone has a population over four times that 21,640,000.  Which do you think is easier to influence?  No, it's not a trick question.

While New Zealand has stricter gun laws than the US, making it easier to mount such an attack there than in the US, any church or mosque attacker in the US has to consider they'll come across someone like Stephen Willeford who used his AR-15 to break up the shooting at the First Baptist Church of Sutherland Springs.  Willeford was home and couldn't react fast enough to keep anyone from being killed; imagine the New Zealand shooter walking into a US church with armed security and a quarter of the parishioners carrying.

Because it's a tiny country, apparently governed by people incapable of coherent thought, it was vastly easier for the shooter to get his gun grabbing agenda accomplished there than here.  At least for now.  I find it wonderfully ironic that as moronic prime minister Arden is going through Olympic-level gyrations to prove she's better than the killer, and that New Zealand is better than the killer, she's implementing exactly what his goal was.  At least the start of it. 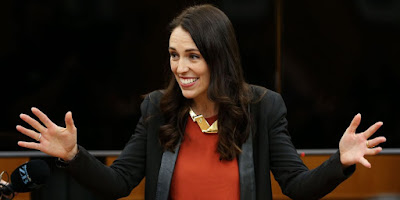 (New Zealand PM Jacinda Ardern  - from Business Insider. I chose this picture because she reminds me of AOC more than in other views.  What do you think?  Same IQ, apparently.)