I mentioned in passing back in December that I've been reading the book "The Skyscraper Curse", an obscure economic observation that became a theory.  The full title of that book is "The Skyscraper Curse: And How Austrian Economists Predicted Every Major Economic Crisis of the Last Century" which tells you a bit more about it.  It's largely a look at economic crisis prediction of Austrian economics vs. the dominant Keynesian economics that has come to rule the world.

Here we are more than two months later and I haven't finished the book.  In fact, it's only in my sitting around the ER with my wife and then a doctor's office that I've increased my reading and gotten past the midpoint of the book. It's not so much that it's a bad book, it's not, it's just that the first half really seemed like 10 pages of ideas jammed, crammed and packed into about 110 pages.

Here's the observation: whenever a world record-height skyscraper is built, the world goes into a crisis and recession.  The explanation is pretty simple.  Go back a couple/three years to the days the skyscraper is being conceived of, planned, financed and construction started and you're very close to the peak of an economic bull market.  Interest rates are artificially low (because that's what Keynesians do) and the demand for office space is so high it's for far more than can be provided in the cities.  Skyscrapers get the most office space out of a parcel of land by going vertical.

By the time the skyscraper is completed, the market peak is reaching its end.  The business cycle is petering out.  Then comes the recession.

This is a correlation, not causation, and it's actually a pretty good correlation.  For nearly 150 years that skyscrapers have existed, only a couple of times when a new record skyscraper was opened did the opening not coincide with an economic crisis, and (author) Mark Thornton comes up with believable extenuating circumstances.  It's not impossible to believe that a major skyscraper is being built now that will be the one that coincides with the next "great recession".

Skyscrapers only began to exist in the late 1800s, when steel frames and concrete construction were developed enough to allow them; before then buildings were limited to how high bricks could be stacked, a handful of stories.  Skyscrapers then turned into high-tech innovation factories.  If more floor space is needed for more offices, the amount of the skyscraper dedicated to things like elevators, fire suppression systems, water and sewage lines has to be reduced.  Higher strength elevator cables and faster elevators had to be developed.  You get the idea.

Along the way of reading the last few chapters I've completed, I came across this analysis of "income inequality" that I thought was worth quoting.


"A monetary system that is dominated by a central bank, such as the Federal Reserve, and uses fiat money, as in our current monetary system, can expect to benefit certain people, such as bankers, financiers, and people with debt. Likewise, because such a system is inflationary, it tends to hurt wage workers and savers. Such a system can be expected to hurt the lower-and middle-income classes and enrich those in the financial industry and the upper-income class.

A gold standard has historically had a tendency for prices to be stable or slightly deflationary. This means that wage rates, cash balances, savings, and bonds tend to gain purchasing power over time. This type of monetary system rewards the hard-working and frugal classes, which leads to an expansion of the middle-income class and the economy."

He presents data from the Pew Research Center (in graphical form) to back up this claim: 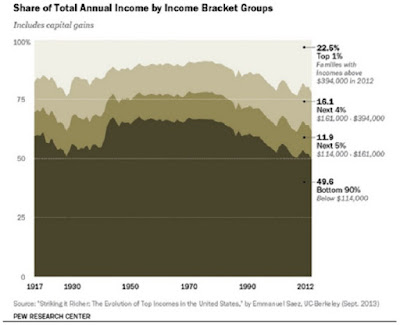 This shows that the bottom 90% of the income distribution had an estimated 2/3 of the total US income from the end of WWII (reinstatement of the gold standard) and the top 1% had about 10% of the total income until the 1980s as the effects of the abandoning the gold standard continued to grow.  By 2012, the bottom 90% dropped down to 49.6% of the income while the top 1% expanded from 10 to 22.5%.

As I'm fond of pointing out, the central banks have cross hairs on savers' backs.  This Pew data and Thornton's interpretation reinforces that.  Of all the complaints about millionaires and billionaires, all the talk about punishing the highest income earners with 70 to 90% tax rates, all of these Evil Party talking points are Raging Against the Wrong Machine.  If they really want to make the life of the low and middle incomes better (the bottom 90% of all income earners in the country), they should rage against the Federal Reserve and fractional reserve banking not the rich.   But, see, that would require thinking and understanding, not just feeling.  Don't hold your breath waiting.

My quick summary of the book is that it's a three to four star book review.  It's good, but the insight density; the number of insights per page, is low compared to others.  My favorite "Monetary Theory for MoFos" book is still "The Death of Money" by Jim Rickards, which introduced me to the Information Theory of Money.  I've mentioned it many times around here (but not in several years) and even posted a lot of interesting things I got from it.