Civil Asset Forfeiture - And the Beat Goes On

In the last few years, the opposition to the practice of civil asset forfeiture across the country has been rising.  The Institute for Justice has cataloged how the states have responded.  Note that some states appear in more than one grouping.  Much more detail at the IJ link.
This despite the president and his former attorney general Sessions vocally endorsing asset forfeiture.

Despite these reforms, the beat goes on.  Asset forfeiture is still happening, and local TV WALB in Lowndes County, Georgia tells the story of a what seems to be a routine traffic stop that resulted in the seizure of over $500,000 in Georgia last week.  H/T to the Foundation for Economic Education - FEE.


Two Colombian men were headed south on I-75 when deputies noticed them driving erratically and pulled them over.

“In and out of lanes, just moving over the line, actually slowed down, got a very slow limit of speed on interstate, actually thought the driver might be impaired," said Paulk.

Sheriff Paulk said deputies reported that the men appeared to be very nervous, so they called in K-9s to check the car.

“The dogs, they’ll also alert on a large quantity of money like that, not just cause it’s money but because it has drugs attached to it," said Paulk.

How did they decide it was drug money and could be confiscated?


“All of it is wrapped the same way they wrap cocaine, the same rubber bands, the same style of wrapping. So, when you see that you know where that money’s derived from," said Paulk.

Sounds like a rock solid case to me!  I mean it used the same rubber bands!  I say, "rock solid case" deliberately tongue in cheek because "case" implies actual due process.  With asset forfeiture in several states, actual charges of criminal violation and resulting conviction are required. Georgia is not one of these states.

There isn't much to this story besides this allegation.  Personally, if I had to be carrying half a million dollars in cash, I'd be nervous about the prospect of being pulled over for nothing and the money seized.

Of course, the lack of criminal charges and proper due process is what most of us who are opposed to asset forfeiture are complaining about, just as many of us complain about "red flag laws" depriving gun owners of property with no due process, not even a hearing with defendant present, and often charging them for the return of their property.  In so many of these asset grabs they never even file charges.  They just see money so they take it.


According to a Department of Justice Inspector General report, between 2007 and 2017, the DEA alone seized $3.2 billion from individuals who were not charged with a crime. Cash seizures without charges made up 81 percent of the funds analyzed in that report.

Beyond the DEA, law enforcement agencies around the country generate millions of dollars per year through civil asset forfeiture and are often allowed to keep or sell the property they confiscate. Utah police seized $2.1 million in 2017, and an overwhelming majority of the cases—96 percent—were drug-related, reflecting the widespread ramifications of the decades-long War on Drugs (proponents of civil asset forfeiture have claimed the practice is a key tool in the costly, ineffective policy).

I've been writing about civil asset forfeiture over the life of this blog (example).  Nothing would make me happier than see it disappear. 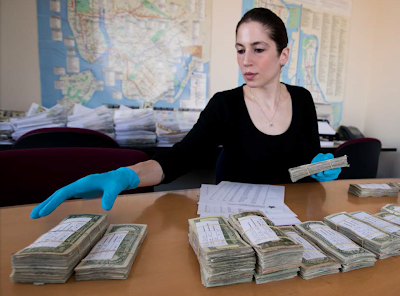 (source - judging by the maps on the wall, probably not Lowndes county, Georgia)