The Police State and Property Seizures 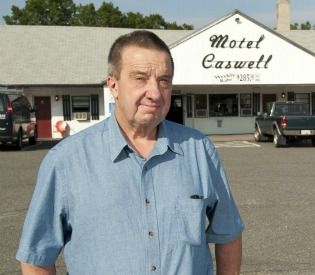 (source) Meet Russ Caswell of Tewksbury, MA, owner of the Motel Caswell.  For the past three years, the state of Massachusetts and the Fed.gov hydra have been trying to ruin Russ and his wife Pat; to take their property, their source of income and their retirement plan.  I'm somewhat surprised at the source but columnist George Will at the Washington Post spins a tale of government simply trying to steal property because they want the money.

Wait...The government is suing an address?  They're suing an inanimate object?  How can an inanimate object be sued?  More to the point, why would they want to?   For the money, of course.  It appears the Tewksbury Police Department has the most to gain, so they must be the ones behind it.  They just managed to get a less scrupulous than average Federal Prosecutor to go along with them (and I suppose that's not a really high bar).  What's the justification?  Why, the War On Drugs, of course!


Since 1994, about 30 motel customers have been arrested on drug-dealing charges. Even if those police figures are accurate — the police have a substantial monetary incentive to exaggerate — these 30 episodes involved less than 5/100ths of 1 percent of the 125,000 rooms Caswell has rented over those more than 6,700 days. Yet this is the government’s excuse for impoverishing the Caswells by seizing this property, which is their only significant source of income and all of their retirement security.

The Caswells are represented by the Institute for Justice,  a "libertarian public-interest law firm".  They add some details on the governmental attacks on private citizens.


The government does not allege that the Caswells have done anything illegal.  But under civil forfeiture laws, innocent people can lose their property—with no compensation whatsoever—if the government believes it was used to “facilitate a crime.”  So unless the Caswells can prove in court that they did everything they could do to prevent crime on their land, the motel—everything they have worked their lives for—will become the government’s property.  In short, civil forfeiture treats law abiding citizens worse than criminals, presuming them guilty until they can prove their innocence—a heavy burden for any property owner against the power and resources of the government.
.....
Of course, the Motel Caswell is not the only property in Tewksbury that has had run ins with crime.  According to police logs, the Motel 6, the Fairfield Inn, and even the nearby Wal-Mart and Home Depot parking lots have similar problems.  But those properties are corporate-owned, which means the government would have to fight teams of lawyers to take them.  And, importantly, the Caswells own their property free and clear, which makes them the perfect target for a government interested in policing for profit: the Caswells are vulnerable and their property is valuable.

This is shades of the tales we hear elsewhere, like the California FTB going after any individuals they could find a bank account number on and raiding the account for "unpaid taxes".  They also bill people from several hundred dollars to a couple of hundred, assuming they'll just pay it, or think it's not worth getting a lawyer to fight.  They don't go after the corporations that will have teams of lawyers to fight.  Governments bully small guys who can't afford teams of high-powered lawyers.  They're easier to screw over.

Civil forfeiture is not a new issue, it's just getting worse.  Around Daytona, Florida, in the 1990s, sheriff Bob Vogel was notorious for stopping cars on I-95.  If you had cash, you must be a drug dealer, so the cash was seized.  Drivers were virtually never charged with a crime, guilt was therefore never proven and the police made over $8 Million dollars for a department fund.

In a way, this is a continuation of Fran Porretto's Sunday piece at Liberty's Torch  It is yet more evidence that the ruling class has declared war on the citizenry.  We are merely sheep to be shorn or cattle to be slaughtered for their need.  Merely this and nothing more.