Almost everyone has published a somber reflection this weekend - I have not.  I've written on this day before, but not in a way that lends itself to just re-posting.  Let me use last year's post, with a few edits to reflect the intervening year.


There has been a lot of talk, including here, about the police state we are becoming, or that we are.  Can we agree to put this aside today and pay respect to those who gave their all?  This feeling isn't universal; I have seen references that those veterans who gave the ultimate sacrifice didn't do that for us, they did it for the government.  They did what they were told.  And that observation was delivered in a way to diminish that sacrifice.

That war is "the extension of politics by other means" is credited to Clausewitz in  the 1800s.  It seems to me the author is right in assertion these men (almost invariably they are men) did what they were ordered to do but terribly wrong in overlooking the sacrifice.

Every week I'm personally torn up by some mis-deed I read about carried out by the police or corrupt governments.  Many are cataloged online, such as at this new home.  Others I stumble across; there are so many stories of injustice that they appear everywhere, not just on the news, but in comments to other pieces.  Many have been cataloged here on my pages (for example).

But it's a simple act to pause, pay respect, remember the men of Omaha Beach, Chosin, and Operation Redwing - among hundreds of such places.  That these men were conductors of US foreign policy does nothing to diminish their honor.  They gave their all for the men there with them.  But they gave more.  They gave us the chance to represent them.


I'm thankful for the sacrifices of the few.

There are images that are icons of this day.  I refer you to one of the most haunting images printed.  It's easy to understand the palpable grief of this young widow.  But this one haunts me in ways I can't express (source) 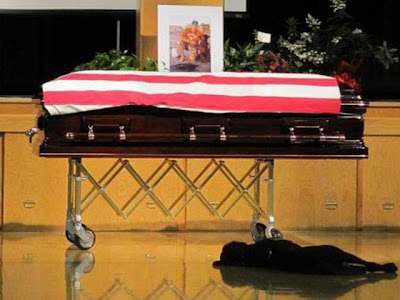 Posted by SiGraybeard at 7:48 PM