Borepatch and Aretae both posted a couple of perceptive looks at the coming election.  I respect both of these guys very much.  Many others have chimed in - and I have as well, though not as directly.   Random Acts of Patriotism - among many others - have used this image (although I think the first place I saw it was Kevin's):

Any old Trekkie will tell you that the Kobayashi Maru is a test given to graduating cadets, to see how they handle the "no-win" situation.  Kirk's claim to fame was that he hacked the computer the night before, thus winning the impossible-to-win test.  The point is, this election is a no-win situation, and we might benefit by trying to brainstorm up a Kirk-like approach to this test.


Let me start my cheerfully admitting that a second Obama term - unfettered by the need for re-election and likely facing a Congress entirely controlled by the GOP - will be a disaster of faculty lounge inspired radicalism.  It will be EPA killing oil production and the ATF arming the Iranian Mullahs.  He will moot card carrying communists for the Supreme Court, as well as for every open Federal Bench seat.  Nobody can constrain his radicalism now, and it will be much, much worse come January.

I would have made that a "a disaster of Biblical proportion carried out by faculty lounge radicals".  I'll see your EPA and ATF predictions and raise you "Supreme Court Justice Eric Holder", and U.N. Arms Trade Treaty.  I'll throw in the Chicago Mafia, the Muslim Brotherhood, an Iranian attack, and a bunch more.  The problem is not just the Marxism, it's the thugocracy: it's a regulator who feels congress and laws are obsolete, a congress that won't pass a budget, a president that doesn't meet with a cabinet but rules by executive fiat.  But a more fundamental question is: what makes you think we even have four more years?  As Kevin said in this comment,


The foundation of your "Let Obama Win" recommendation is "We can still save the Republic!"

I'm not so sanguine.

I think we've passed the point of no return and we're augering in. The only difference we can effect now is "how hard will we hit?"

Can we really stand four years under the NDAA, and the rest (source)? 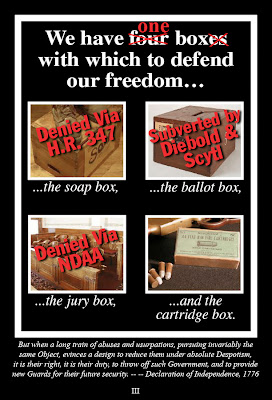 Aretae suggests that if your aim is to try to straighten out the stupid party, as Borepatch seems to want, simply vote for the Libertarian candidate.  They largely draw their support from conservatives anyway, and perhaps it would be noticed more.  If you simply vote for the Evil party, I don't think the election numbers they see contain that information.

A longtime friend's wife is an insider with the Stupid Party of Florida, and has been on the Romney bus for months.  He and I were discussing possible bumper stickers for Romney.  The obvious one is "Romney: at least he's not a communist".  I'm kind of fond of another idea I had: "Romney: he just may destroy the country, but it won't be deliberate".

See, we can bitch and moan all we want about Romney, but the fact is he won the nomination by getting more primary voters.  Say what you want about "he was pre-destined", or "it's his turn" or any other put down you want, but he won.  The party chose him.  Yes, he got more money donated to him by the "too big to fail" banks than any other candidate, and, yes, he ran a nasty, negative campaign.  Notice how, as soon as he dropped out, all of the "sexual harassment" charges against Herman Cain dissipated like fog?  Notice how any other candidate talked seriously about the real problems and the real need to cut spending, they were ripped apart by the press - and even my fellow bloggers - for being crazy?  I'm talking specifically about Michelle Bachmann and Rick Santorum, as well as Ron Paul, who talked about the seriously bad times that are coming.  The only person who has gotten away with talking about cutting spending is Paul Ryan, whose plan falls so laughably short of being useful it's pathetic.  That probably means he's not considered a threat.

So what's the answer?  Romney?  Obama?  Gary Johnson (L)?  Frankly, they all make me sick and this really is the no-win situation.  Unless we can pull off a James T. Kirk and figure out a way to win the no-win, we get what we've got.  Seems like the other day I said,