The Least You Should Know - AC Motors

You thought the last topics were big, so I'm going to narrow it down a bit.

I like to think of the electrical world as being composed of a few "continents".  One continent is certainly electronics: computers, calculators, TV, radios, audio amplifiers, electronic music, and the many electrical toys we're surrounded by.  Another continent, certainly a very important one, is power: generation and transmission.  For the most part, these continents don't touch - except where your electronic device connects into the power generation and transmission system.  There are not many components that these two continents share. I can think of only a handful: wires and connectors, sure, but also motors.  From the giant electric motors in diesel electric locomotives to the tiny "vibrator" in your cellphone - the silent ringer - motors occupy big places in both continents.

The basic reason motors work is because electricity and magnetism are one and the same thing - electromagnetism.  This stuff gets mathematically complicated: if there's one area that the vast majority of other engineers I've known hated in school, or had a wicked hard time with, it was electromagnetics.  I'll leave out the math, but just know that an electric field creates a magnetic field, and likewise, that magnetic field will create another electric field.

The most basic motors, the ones in widest use for the last hundred years or so, are AC induction motors.  AC motors, like all motors, are built from a combination of coils of wire (which we know are inductors) and magnets.  They have a rotating piece (not very useful without that!) called the rotor and a piece that's not moving (stationary) called the stator.  Something like this (source -and more in depth tutorial than this): 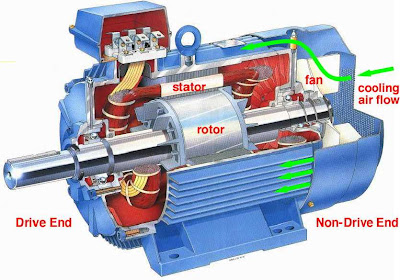 These motors ordinarily rotate at a speed related to the AC frequency.  60 Hz AC (60 cycles per second) is 3600 in a minute, and motors rated at 3600 RPM or 1800 RPM are very common.  Under load, that frequency tends to go down from an effect called slip.  The dependence on the AC frequency to set the motor speed in RPMs makes them hard to use if you need variable speeds.  A variable frequency drive is needed (generally created by electronics). These motors are available in a very wide range of torque and power, from small fractions of a horsepower (1/4HP electric drills used to be very common) up to behemoths you won't have in your house or on your farm.

Electric motors are capable of very high efficiency, over 90%, one the reason they're attractive to "alternative energy" folks.  As you might expect, weighing against this advantage are some disadvantages. One is that being connected across the power line lets AC motors draw high peak currents, as much as seven to 10 times normal operating currents, at start up. This is one of the reasons for the starting capacitor many motors have, and large motors (like central air conditioners) will sometimes have a "soft start" kit.  Obviously, these current surges can affect other devices on the same circuit.

AC motors are the workhorse of the shop.  Chances are you have several around your house right now: in power tools, an air conditioner, fans and other things.  They are very limited, though, by the dependence on line frequency.  Many more motor applications are available for motors that can rotate at variable speeds, or that can move a fixed number of turns, or simply move an accurate portion of a revolution.  Those are DC motors of various kinds, and that's the topic for next time.