The Least You Should Know - Stepper Motors pt. 2

If you want to control and drive stepper motors, you can either build a discrete transistor switching circuit or use one of the many off the shelf solutions.  There are integrated circuits that handle most of the nitty-gritty details for you.  For example, a part which has been around a long time, and used by both industry and hobbyists is the Allegro Microsystems A3977 (datasheet here).  The A3977 is designed to take two signals, a clock that times each step, and a logic line to tell it which way to turn, and make those into the analog signals (currents and voltages) to drive the motor.  These are usually called "step and direction" inputs, and a computer parallel port drives them - with some attention to details.  I will just give a couple of brief examples of the drive signals.

The essential way to drive a motor is to give it pulses 90 degrees out of phase to each other on the two windings of the motor.  The timing of this is shown here: 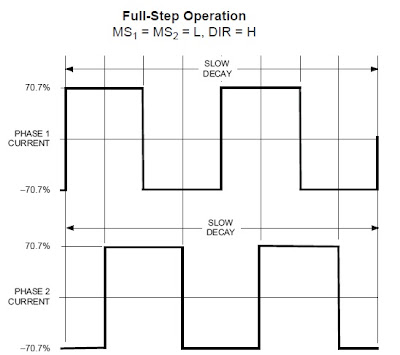 The motor will move one step when given a set of pulses like these.  If the phase lead reverses, so that winding 1 is behind winding 2, the motor steps in the other direction.  You can run a motor all day this way.  One of the tricks that controllers like the A3977 do is called microstepping, dividing each step into up to 8 steps.  The current driving the motor changes more smoothly, approaching a pure sine wave, like this: 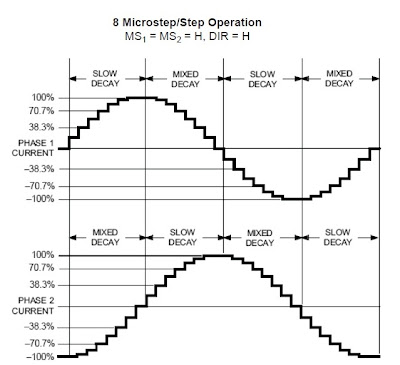 Microstepping smooths the motor's motion, and helps with resonance issues, but you can't guarantee that the position is accurately 1/8 of the previous step - which would make the motor I showed last time give 1600 steps per revolution (.225 degree per step).  Wait - resonance?


At specific step rates stepper motors often experience an undesired reaction called resonance. The indications are a sudden loss of torque with possible skipped steps and loss of synchronization.  Resonance is inherent in the design and operation of all stepping motors. Slow stepping rates combined with high rotor inertia and elevated torque produce ringing as the rotor overshoots its desired angular displacement and is pulled back into position. Resonance arises when the step rate coincides with rotor ringing, typically about 100 to 200 steps/sec. Unable to overcome the combined effects of both load inertia and ringing, the motor skips steps and loses torque and synchronization.

If microstepping doesn't stop resonance issues, it has been found that changing the speed or the inertia, usually with some sort of extra load, will cure resonance.  I've seen washers stacked up, and even custom thingies.

You will find stepper motors specified by the current on the coils and small voltages.  A typical example might be 3 or 4 Volts at 2 amps.  The high voltage applied to the motor through a part like the A3977 is often 25V (it needs to be under 35 No Matter What Happens).  This is to allow the chip to hammer a leading edge spike into the motor to help overcome the back EMF and get the thing moving. The voltage settles to what the winding allows.

Stepper motors can be very useful to have around.  They are the muscle moving all sorts of systems.  The biggest disadvantage is that once you send the command to move, you have no idea whether or not it really moved, and if it did move, if it moved the right number of steps.  Lost steps are the bane of stepper-based systems and can lead to ruined work or damaged systems.

More as I try to figure out what else is a good "least you should know".