The Least You Should Know - Stepper Motors pt. 1

It has been a while since I've done anything in this series, so let's dive into a very useful subject.

A stepper motor is a type of DC motor that is driven by pulses rather than steady DC voltages.  Since what computers tend to "speak" inside is all pulses, this makes them a natural to add to a computer and stepper motors are used in computer applications, from disk drives to printers and more.  Driving with pulses brings problems because of the way the inductance of a motor's coils opposes current flow through the back emf.  In trade for developing circuits that will better drive current into inductors, you get a lot of good things.  Steppers allow precise control of motion: movements of less than a turn are simple to control, and accurate step size is a feature of these motors.  There's a few different types of stepper motors; you're likely to find motors referred to as Variable Reluctance (reluctance is resistance to movement of magnetic lines of force), Permanent Magnet and Hybrid motors.  There are also bipolar steppers and unipolar motors.  Here's a simplified diagram of how a bipolar stepper is built, as shown by Stepper World:

As coils are alternatively pulsed, the rotor snaps to the next position.  The coils are built into the outside stator, and the rotor has a non-integer ratio of the number of magnets to these coils.  How many?  Here's a photograph looking into a relatively new, state of the art, small stepper motor; you'll count 48 stator poles ("teeth").  The rotor is visible at top right. 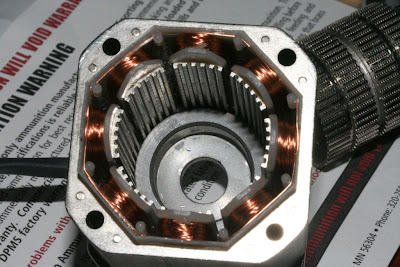 Better view of the rotor: 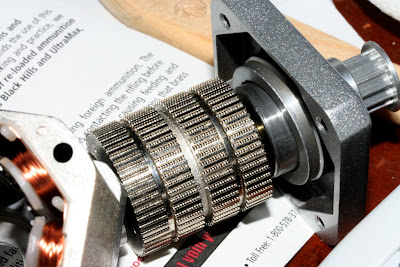 There are 50 raised areas on the rotor magnet (by the way - if you ever take apart a stepper like this, chances are you'll never make it work right again.  This one was given to me in this state).

This is a 1.7 inch on a side, square frame motor (NEMA 17 in the trade language) with 200 steps per rotation.  That gives (360/200 or 1.8 degrees per step).  A motor in this size will give a stall torque of about 60 in-oz.  A high torque motor that steps 200 times per rotation is extremely useful.  Say you attach this to a common 1/4-20 threaded rod to move a tool or work piece (not the best way to drive a tool, but certainly easy).  One turn advances the screw 1/20 of an inch, .050'.  One step of the motor moves by that .050'/200, allowing you to move something 250 millionths of an inch at a time.  How accurately?  The motor vendors will specify the accuracy of that position change and the rest depends on the screw's accuracy.

There's a handful of NEMA standard packages for stepper motors (NEMA is the National Electrical Manufacturers Association); in many cases, the NEMA standard motor you buy is just specifying the mounting interface and location of the holes.   That is, the mounting interface is the same, but the motor is a different length.  NEMA 23 is a common size for small machine tools, and torques of NEMA 23 motors may range from 80 in-oz up to over 400 in-oz with different length motors.

So "how do you cook it?" (as they used to say on Monty Python)  Stay tuned.