No Limit To What They'll Regulate 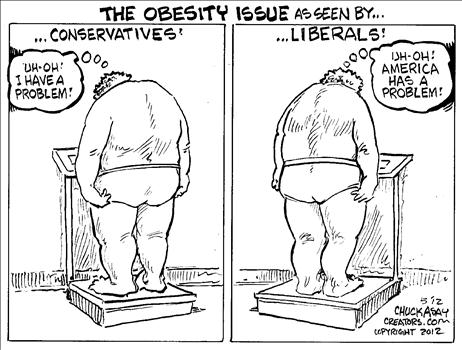 One of the most serious problems with letting the Fed.gov hydra take over the health care sector of the economy is that there is no limit to what they'll regulate, no freedom they won't take away.  Everything can be linked to risk of increased illness and higher health care costs.  The study doesn't have to be good, it just has to be quoted by the Jack Booted Thugs doing the regulating.

Headlined on Drudge today was this gem from Indianapolis "Report: 'Fat Tax' Could Curb Nation's Obesity Problem".  They are seriously talking about a 20 % tax on foods deemed "unhealthy".  20%!!


A new study suggests that imposing a fat tax on unhealthy food and drinks could help slim down expanding waistlines....

Researchers said a fat tax could drop obesity rates by 3.5 percent and prevent 2,700 heart-related deaths a year. The study also urged subsidies for healthier foods and veggies to make them more affordable.

It. Is. None. Of. Their. F**king. Business!  I don't care if it untwists scoliosis, reverses hair loss, cures cancer, defeats the Nazis and puts men on Mars, it is none of their business what free people eat.

But the part that probably irked me the most was this idiotic quote:

Listen, if you're so undisciplined that you need to pay the government 20% tax to keep you from eating things you believe you shouldn't, you shouldn't be allowed out of the house, or near sharp objects.  You obviously have no brain. (By the way, it's an old journalist tactic to make up unattributed quotes like this.  You should always consider a "some say" or this "one woman said" attribution to mean "this reporter said" or "the guy at the next desk said").

As I documented two years ago, the Feds argued in court that we have no fundamental right to choose what we want to eat.  Now the state of Indiana, and others, thinks it's perfectly within their purview to tax you for eating "unapproved" foods.

While I've got a rant going, that article feeds nicely into this one in USA Today warning that "96% of Restaurant Entrees Exceed FDA Limits" - another adventure into the land of government over reach.  According to our insect overlords at the USDA:

How much is too much?

These USDA recommended limits were used to measure against main entrees:

This is clearly derived by dividing the ubiquitous nutrition panel 2000 calories per day by three.  The fundamental problem with this is there isn't a single "fact" in this panel that's a fact.  As I published here last July:


The other big problem I have with this [note - removing obese children from their homes - GB] is the fact that medicine is exceptionally bad at treating obesity.  I (and many others) would suggest that the diet the doctors are recommending is probably the cause of the kids' obesity.  Would it surprise you to know that a leading researcher who has been studying obesity for decades believes dieting may be the cause of most obesity?  A couple of weeks ago, I wrote a piece on some truths about diet and fitness that are hard to get out.  It's not a stretch to say that if you're like most people who haven't studied this, everything you think you know is probably wrong.  [emphasis added this time - GB]

For instance, in the book I'm reading now, The Art and Science of Low Carbohydrate Living,  (a fascinating read for those who like rock hard science) researcher Steven Phinney, M.D., Ph.D., reports that they've determined optimum sodium intake for adults on a very low carbohydrate diet is around 5 grams per day - over twice the USDA recommended maximum.  The 10% saturated fat number is no more than a guess.  Despite decades of bleating about restricting it, saturated fat is not associated with increased risk for heart attacks.  Saturated fat behaves very differently depending on which exact fat you're eating, and what else you're eating with it.  The 35% total calories from fat has no more hard data behind it than saying "eat three meals a day".  And calories certainly can't be the same for a small woman or an NFL lineman.  It's all a very worthless set of numbers, presented as a rigorously derived scientific standard that all meals should be measured against.

Besides, as I quoted in (admittedly, one of my favorite titles) "On European Mountain Goats and Michelle Obama" and "The Invasions Continue", the experts don't know that telling you to limit salt intake won't hurt you instead of help you:


Did you get that?  This Doctor, President of the American Society of Hypertension, said that we don't even know that if we tell the public to cut their salt consumption that it won't hurt them.  So the fed.gov can't even say, "cut your sodium because even if it doesn't help blood pressure, at least it won't hurt you"; we don't know that.  But the FDA is going to do it anyway.   Michael Alderman, President of the American Society of Hypertension, Department of Epidemiology and Social Medicine, Albert Einstein College of Medicine, Br Med J 1997; 315: 484-5

The USDA limits on calories, sodium, fats and whatnot shouldn't be taken any more seriously than a random pile of numbers.  I find it ironic that as millions of people in Europe shift to an LCHF (Low Carb High Fat) diet and are improving their health, so many people that there are butter shortages, our country wants to tax fat consumption.