The crazy anarchist/communist kids of Occupy Whatever long ago declared they'd follow the long standing communist practice of making May 1st a day to get out and get active, and so they have.

Kevin has the absolute best summary of Victims of Communism Day, and you should definitely read the whole thing.


J. Rummel, Professor Emeritus of Political Science at the University of Hawaii, has calculated that the total number of victims of Communism - that is, the domestic victims of their own governments - in the USSR, China, Vietnam, North Korea and Cambodia is 98.4 million people.  For all Communist governments during the 20th Century, he puts the estimate at approximately 110 million.  And this wasn't in warfare against other nations, this was what these governments did to their own people - "breaking eggs" to make their utopian omelet.

and I shamelessly steal a graphic Kevin has used before. 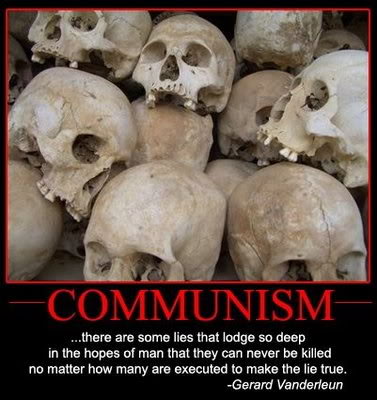 Maybe it's that old, weird, engineer side, but for the life of me, I can't understand why the idea is so attractive to anyone but psychopaths today.  We can forgive the first ones, the Russians and maybe the National Socialists (Nazis); they had no history to look at.  The people who let it happen didn't know that there would be nearly 50 million of their neighbors killed by the government.  But even by the '60s, when Bill Ayers, Bernadine Dorn, and the Weather Underground wanted to force communism in place here, they not only knew it would lead to millions killed, they apparently wanted to do the killing.   An FBI informant tells of them openly talking about "eliminating" 25 million hard core Americans who wouldn't go along with their little utopia.  I guess the gulag's not such a bad place as long as you're the one doing the killing.

In contrast to the guys who want to start the killings, the useful occupy idiots seem unaware of any history or the reality of communism - it's all magic unicorn farts and rainbows.  Famines and death camps?  Not so much.  Remember the morons in the Occupy last fall who told someone who grew up in the USSR that North Korea was an ideal place, compared to south Korea?  North Koreans get paid fairly for their work, while south Korea was an oppressive place?  Someone should tell the horribly scarred torture survivor Shin Dong-hyuk, who watched his parents executed and escaped over the burning body of a friend, stuck on the electrified barbed wire, as he escaped from the forced labor camp he was born and grew up in.

I've been saying since last fall that Occupy was going to return once the weather up north got pleasant enough for them, and are not going to stop until they provoke bloody riots and more killings.  They say so themselves in a slightly more roundabout way.  In the mid-60s, around the Watts Riots (Frances Fox Piven's inspirational event), they used to say, "it's going to be a long, hot summer".  Word up.
Posted by SiGraybeard at 9:39 PM