The Stupidest Political Ad Ever 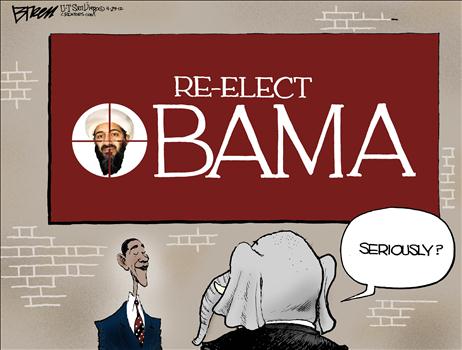 (from Steve Breen at Town Hall)

The stupidest political ad in history has to be the Obama campaign ad that implies making the decision to take out Osama bin Laden was some sort of brave, visionary, tough decision.

This was without a doubt the easiest decision in history.

There was absolutely no down side to making the call and no up side to not making it.  If the raid failed, there would be some backlash from some circles, but I'd bet the vast majority of Americans would forgive the president quickly because, "at least he was trying".  The Pakistanis capturing our guys would have been the worst possible outcome, but DEVGRU against anyone in the area, with the ability to call in backup and air strikes?  There isn't a gambler in Vegas that wouldn't take that bet.

On the other hand, if Obama didn't decide to get him, that would get out, like "hot" classified information usually does (I assume you've heard the tape of Bill Clinton talking about how he passed on taking bin Laden during his presidency - that's what I mean).  And then Obama would be demonized and hated by over 80% of the US.  It would be an automatic lifetime ban from political office.  "Dogcatcher?  The guy who didn't want to risk taking bin Laden out?"  Any president who didn't go after OBL would get the same.

Sparklies meant to distract us from the wholesale destruction going on.  That's all.
Posted by SiGraybeard at 8:54 PM