About a 18 months ago, I bought a couple of Savage 64F, semiauto .22 rifles.  They're fine, modern rifles, and similar to the same price class ($150-ish retail) rifles from other sellers.

Like many other rifles in its class, the stock has to be removed to clean it, and some disassembly is required.  This is where the problem starts.  This picture shows the barrel, trigger assembly, magazine holder - pretty much everything besides the stock, upside down in a gun vise: 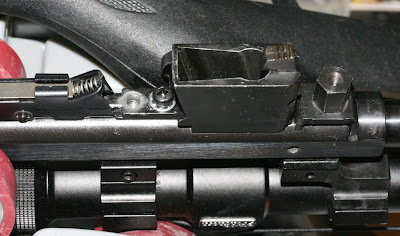 To the left of the magazine holder (sticking up with a "keystone" shape opening) is a screw with lockwasher, and an open hole to its left.  What goes in that hole is a round piece of steel: one end of this is an external threaded stud to screw into that hole, and a tapped hole on the other.  The internal threaded hole receives a screw that holds on the stock - there are two screws and the other one goes in that tall hex-nut on the right.  Somehow, that threaded hole on the left in the rifle got barfed up. 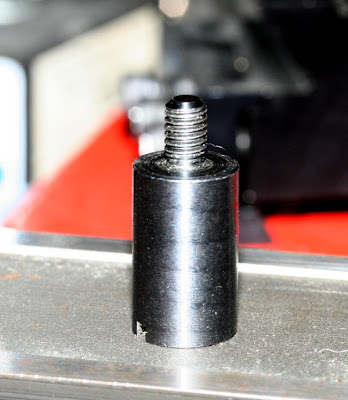 This is the piece that goes in that hole.  It's about 3/4 inch long and .450 diameter (the round part).  It doesn't appear to be any sort of high-zoot alloy, and is finished in "something black".  I was able to get a replacement from Savage, but that didn't solve my problem (I didn't know threads in the rifle upper were damaged until I got this).  The threaded stud on the top of the piece is 10-32.  The internal thread is an odd one: #12-32.

When the threads in a hole get barfed, there's not much you can do except tap it for a larger hole or weld some filler into it and try to drill and tap it again.  Since I don't have welding stuff, adding filler is out.

And that's how I spent my Saturday.  I have a few feet of steel bar - 12L14 a general purpose alloy that machines easily.   First, I cut a long enough bar to machine what you see there, then turned the large and small diameters.  Next, I cut the threads on the stud portion with single point threading on the lathe.  I used the replacement from Savage to test the 12-32 threads I cut - they thread together fine (I don't have any other 12-32 hardware, and it's always reassuring to check threads you've cut).  The only things left to do in the morning are thread the internal hole in the steel with the Midway tap, and put a screw driver slot in it (visible bottom left in that picture).  I'll have more info tomorrow.
Posted by SiGraybeard at 11:19 PM