Sometimes, Things Take Care of Themselves

Off on another tangent, I want to open with something you've seen but may have never actually noticed or thought about.  For this concept, observe this photo of the well-known Piper Cherokee airplane: 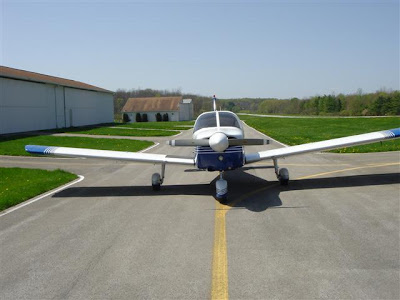 Pilots may skip a few paragraphs and come back later, but I want to draw your attention to the angles the wings make with the horizontal.  Notice how they don't make a line parallel to the ground?  Do you know why?

One of the things most people don't "get" about aircraft wings is that there is a small range of angles over which they provide lift, and a very small range for optimum performance.  A wing provides the most lift (vertical force to counter gravity) when it's parallel to the ground,  In addition, the angle of attack - the angle that wing makes in the front/back direction - is carefully controlled, and usually small.  Most airfoil designs provide increasing lift with angle and then suddenly stop lifting (called a "stall" - but has nothing to do with the engine) when the angle of attack is beyond about 30 degrees.  Ever notice that most airplanes land at a shallow angle, and take off at about 10-15 degrees?

The reason the Cherokee's wings angle like this is that they make the plane easier to fly by providing an automatic, hands-off control system that corrects for minor errors in handling or wind differences.  If one wing were to get more lift than the other, due to minor variations in the controls, that wing will start to lift, rotating the plane around the line pointing at us in the photo.  That wing will pull up and the other roll down to a more horizontal position.  As this happens, though, the lifted wing will loose lift and the the one that became closer to horizontal will get more lift, returning both wings to the neutral orientation seen above.

If you look at virtually all low wing aircraft from small single engine planes like this to commercial jets, the wings are angled to the fuselage in a similar way.  It acts like a feedback control system to return the plane to level flight.

Modern small planes incorporate so many little things like this that many accidents happen because the pilot defeats the airplane and if they would simply take their hands off the controls, the plane would right itself and resume level flight.  I've heard dozens of stories of a pilot falling asleep or being incapacitated and the plane going on in level flight.  I'm sure I haven't heard them all.

So where am I going with this?  A free market economy has several of these built-in feedback system at work, the biggest being simply "supply and demand".  What's a house, a car, or a diamond worth?  Exactly what someone will agree to buy and sell it for.  And just like the student pilot that crashes their plane because he can't take his hands off the controls, our "leaders" keep messing with the supply of money, the interest rates, allowing or blocking foreclosures, and other things.

If the Fed, the European Central Bank, the Bank of Japan and all the rest evaporated overnight, followed by the collapse of the global fiat monetary systems, it would be a horrific transient that would hurt like crazy, but in the big picture it would be like the airplane's wings.  The world's economies would eventually right themselves if the "powerful" would stop screwing with it.