I just watched the best investigative report I've seen in ages.  The story is now online at The Blaze.  Like a Grand Unified Theory in physics, it pulls together various things that appear unrelated and explains them as portions of one big jigsaw puzzle.

Let me start out with a disclaimer: I've already written a few times that (1) I think Warren Buffett is a stinking hypocrite and (2) the so-called "Buffett Rule" is just a political wedge ploy designed to peel off groups of voters into Stupid or Evil party votes.  I have not specifically called him a criminal crony capitalist; that's tonight's mission.

Let's start, as Beck did, with the run up to the election of the resident.  Buffet was courted by both John McCain and BO.  For reasons that we didn't know at the time, Buffet sided with Obama.  When Buffett claimed his secretary pays more tax on her income than he does - a blatant lie, deliberately conflating dividend income with ordinary income - that was the opening round.  This was done as a favor for the Marxist's divide and conquer strategy, a tactic that will be used until the election, that story link is one day before my column on the topic was posted August 15, 2011: late last summer.  Before this date, November of 2009, Buffett's Berkshire Hathaway bought up rest of the Burlington Northern Railroad that they didn't already own.  Just a coincidence, for sure.

Fast forward to this year.  The Transcanada Keystone XL pipeline is, in review, a projected pipeline that has been in the approval cycle for over three years.  This pipeline is intended to bring oil from the tar sands of Alberta, Canada to the Gulf of Mexico (map source) 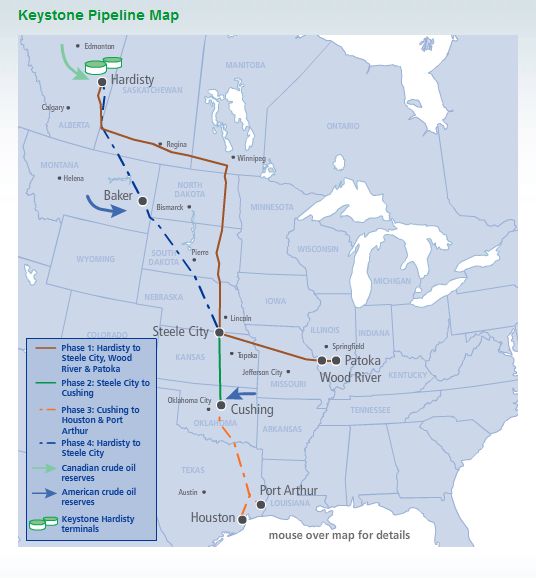 Last fall, this seemed like a "done deal".  The State Department had approved it, EPA approved it, everyone approved it.  In fact, the greens were complaining that the process went so smoothly that someone had to be corrupt.  Then the President killed the project.

Now that oil has to go somewhere.  It may go to China via tankers loaded on ports in British Columbia, but it also may be used in the US and go to those refineries on the Gulf Coast.  But more and more, it looks like instead of pipeline the oil will be going by (wait for it) ... Warren Buffet's Burlington Northern Railroad.  How convenient! It allows Obama to appeal to his watermelon socialist base, help keep the price of oil from dropping too much (also clearly an aim of the Obama administration), and it will pour money into Buffett's empire.

Now there's more corruption to this tale than this, and I recommend you read the whole thing (and watch the videos).  It appears that Nebraska senator Ben Nelson is up to his ass... up to his Ben Nelson in this, too.  See, Senator Nelson owns millions of dollars worth of Berkshire Hathaway stock and has acted to protect both Buffett's and his own money.  It makes sense - having more stooges along the way who will make money from this will help Buffett manipulate the congress as he needs to.

So what this looks like is Warren Buffet made a deal with Obama promising to help Obama win reelection by helping with the class warfare, if Obama would force the oil from the pipeline onto rail tankers that he owned.  Classic Washington "I'll scratch your back if you scratch mine" corruption.
Posted by SiGraybeard at 9:09 PM