At the risk of igniting caliber wars, let me show you our BAG day booty.  Our BAG was a BUG, the North American Arms 22 Magnum with holster grip.  As you can see in this shot, this gun is about the same overall size (when folded up) as my iPhone 4. 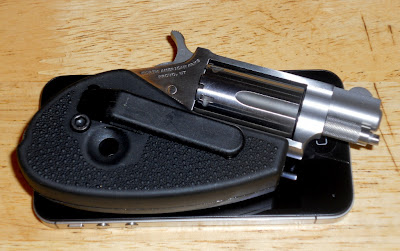 Let me admit I've been attracted to these little guns since before we got our CC permits in '09.  The little NAA revolver (SA only) shoots .22 Magnum (WMR), and the one we got included a second cylinder that handles .22LR.

Took it to the range today and this little thing is hoot.  Loved it.  Mrs. Graybeard loved it.  Both of us remarked it was more fun to shoot than we thought it would be.  The .22 magnum makes a pleasingly louder bang than plain .22LR, although she prefers .357 Magnum (which is in a class of its own).  Easy to shoot one hand or off hand.  We shot at 10' or so, and it took a cylinder or two to get a feel for how it aims (there's no notch in the back to put the front blade in), but we were good with it after that.  This is not the kind of gun you're going to use for IDPA or rapid fire.  It takes a minute or so to reload.  See that pin sticking out below the barrel?  You push in on that while grasping the knurled part, and pull out the rod.  The cylinder pretty much falls out into your hand which you then unload and reload.  Once it's loaded, you rock the cylinder gently back into place and put the pin back. 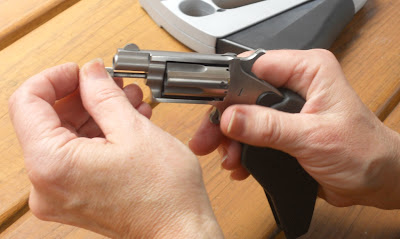 This was bought specifically as a back up gun, or for deep concealment in a place where you really have a hard time concealing.  I could carry it in a pocket of my (almost omni-present) cargo pants without anyone ever knowing.  It fits in a purse or the smallest of fanny packs.

.22 Magnum?  Srsly?  How good are the ballistics?  They're actually pretty good.  This video from Hornady shows 11 to 12" penetration in standard gel, with the hollow point unfolding well.  This video from Brass Fetcher was with this model gun and the same round we're shooting here.   Let's face it: it's not a major caliber, but it penetrates about as well as .380ACP, one of the most popular calibers.  To paraphrase Michael Bane, though, it would be much more effective than harsh language.  Nobody likes to leak.  Get a couple of holes into them and the typical street toad might change his plans for the day. 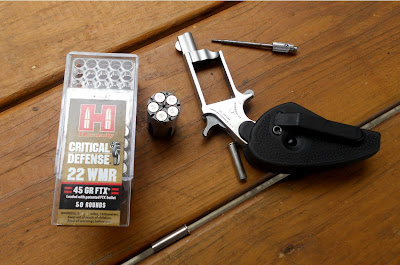 This is summer in Florida, when you have to dress lightly or die.  It would fit in perfectly in my cargo shorts and tee shirt summer wear, and anything Mrs. Graybeard would wear or carry, too.
Posted by SiGraybeard at 10:01 PM