A Project Finished, A Weekend Class

I was finally able to cut the screwdriver slot in the threaded standoff for my Savage 64F that I talked about last weekend.  Broke an end mill by feeding too fast, which means the fix cost even more, but got it cut on the second try. 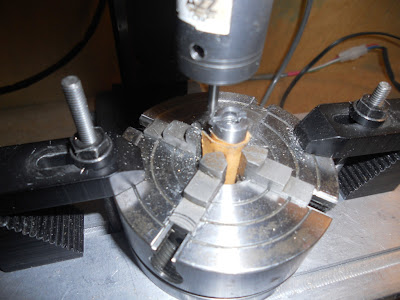 I put it in the rifle with a dab of red Loctite, and put the rifle back together.  Fits fine.  Shoots exactly as before.  A successful fix.

I realize I'm probably one of only a handful of people in America who shoots regularly that had never shot a Ruger 10/22, but I fixed that problem this weekend.  All I can say is: anybody want a Savage 64F?  Only a slight exaggeration, but that was like an entirely different class of machine; like comparing a really nice car to an econo-box.  Cadillac to Corolla?

Today, Mrs. Graybeard and I attended a Civilian Trauma Medicine first aid class.  I used to have a Red Cross first aid card - 40 years ago.  I even worked as an emergency room orderly at that time, helping the doctors with suturing, casting, even doing CPR on the hospital's "code team".  But wars always advance trauma medicine, and my (partially-recalled) knowledge has gone obsolete in places.  The combination of Gulf Wars I and II, plus Afghanistan, and the things Israel has learned from years of suicide attacks have changed some things.  With small unit tactics, maybe four to six guys, the number one rule is to win the fight and then attend to each other.  You might have to do first aid on yourself to keep fighting, or lean on your buddies groin to put pressure on his femoral artery, so that he doesn't bleed out and die while you're getting out of the mess.

I think our instructor is uniquely qualified to teach this, being a trauma specialist RN, as well as former special forces, an NRA instructor, and having worked security for the State department in Iraq, Haiti and other - shall we say, unpleasant - places.  He says the class is not for the squeamish, and it was as advertised, with plenty of pictures of IED wounds and other damage from Iraq, plus other (mostly deceased) cases from back home.  The highlight, though, was shooting a couple of pork roasts with 9mm hollowpoints and allowing us to examine, and then bandage the wound channels.  Not something I've seen in person.  BTW - what's the current recommendation for treating a gunshot?  Plug it with a tampon.  Quickclot was over used in theater and has fallen out of favor.  Last resort only.

But... tomorrow is Monday, so back to the mundane.
Posted by SiGraybeard at 6:24 PM