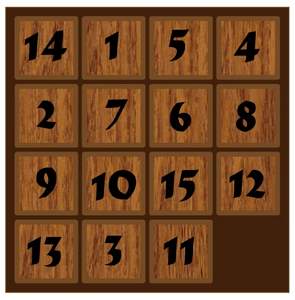 The idea is to put the 15 pieces in numerical order, 1 in the top left, 15 in the bottom right. As you can see, it takes thinking several moves in advance.  You almost always need to make many moves of the other pieces, to move the one you want.   In the words of the "Math in the Media" article:


When the puzzle appeared around the year 1880 "it created as big a craze as Rubik's Cube a hundred years later. The most popular version was due to the famous puzzler Sam Loyd, who presented all the tiles in order, except with the 14 and the 15 swapped. Loyd offered a prize of AUS$1000--worth about $20,000 today--to the first person to solve his puzzle. The prize was never collected." The authors go on to explain why.

It's not just the swap of 14 & 15; according to the Wiki article, in 1879, it was proven that half the starting positions are unsolvable, no matter how many moves are made.

So what's up with this puzzle?  I need to rearrange stuff in my garage shop to make an empty space.  This is a pretty good approximation of what my shop looks like and what the weekend holds.
Posted by SiGraybeard at 11:13 PM