It was busy around Castle Graybeard this weekend, as usual.  Still catching up from last weekend's Tetris moving experience (thanks Elizabeth!).  The stuff that was moved with "just put it over there for now" is being put into better places, and some of the junk that should have been put in the trash is gone.

We took off to the range to try out a few things, shooting the smallest and largest caliber we have (in handguns, of course). 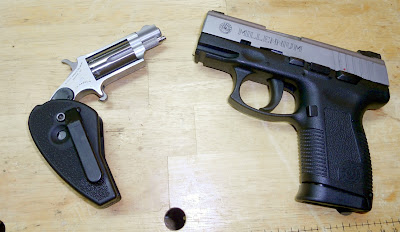 That's our North American .22 Magnum and Taurus Millenium .45 Subcompact (I call it that because it's virtually the same size as my XD subcompact).  I've only shot the Taurus a couple of times, but every time I pick it up, it's like I've never put it down.  I have the same experience with my XD subcompact.

The range we went to is the American Police Hall of Fame range near Titusville, Florida, on one of the entry roads to the Kennedy Space Center.   If you're ever near the Space Coast (or Silicon Swamp, as I call it), this is the best range I know of.  Large and "open" feeling, electrically positioned target holders, excellent staff, rentals of everything, and the best air conditioning.  They're quite a bit more user friendly than other ranges I've been to.  You can rapid fire, and you can bounce around in the lane (which has a movable "cover" to hide behind).  I'm not completely sure you can draw from a holster - I've seen it done, but the guys doing it were accompanied by trainers.  It's a bit of a drive for us, but worth it. If you're in Orlando for any reason, it's about a half hour from the airport (that's a bit of a guess - don't hold me to it).

And speaking of guns, IMAO has a piece on the Lego firearms that raised a stink in the San Francisco Chronicle's "Mommy Files".  As the NRA-ILA reported:


The Mommy Files does its best to provoke righteous indignation and gets some traction with a random British father, who in a rather un-English display of temper whines that "it's just wrong, wrong, wrong."  Yet even the developmental psychologist the blog consults cannot muster much concern.  "Play is play," the doctor states, adding that research has not shown that playing with toy guns can lead to aggression.  But, argues the blogger, these guns are realistic.  "They're not realistic," responds the doctor.  "They don't shoot. These guns are related to the impulse to create, not the impulse to kill."

Pretty bad to go into PSH over Legos, for cryin' out loud... but it's San Francisco.  What can you say?

We also took part of the afternoon off, after cleaning the guns, and went to see The Avengers.  I'll add my voice to the others who have seen it and said it was the best movie of the bunch.